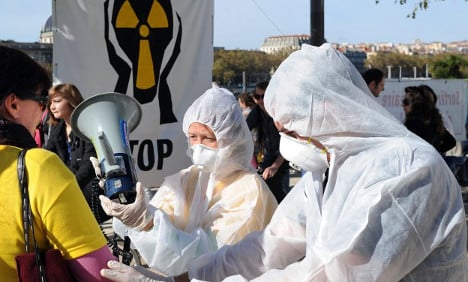 That’s the conclusion of a new report by France’s ANCCLI commission that reports on the state of the country's nuclear facilities.

“France is not ready to face a serious nuclear accident,” warned the commission’s president Jean-Claude Delalonde. “Even though a national response plan was made public in February 2014, nothing has been put in place,” he said.

The report comes after both Switzerland and Germany have expressed concerns about the safety of some of France’s 19 nuclear power stations, with authorities in Geneva even launching legal action.

According to Delalonde's association the French government has not learned the lessons from previous disasters like Chernobyl that was presented as a “Soviet” accident.

The Fukushima disaster in Japan prompted the French to improve certain safety measures around nuclear reactors but ANCCLI want more.

They want the “emergency zone” around nuclear power stations, where measures are put in place in the event of accident, extended from the current 10km radius to 80 km.

The fact this hasn’t been done already creates a dangerous situation for Europe, the report says. For example France distributes iodine tablets, which protect against the potentially cancer-causing effects of radioactivity, to those living within the 10km radius of a nuclear reactor, but in Belgium the same measure is taken within a 20km radius.

After Fukushima, the radius was extended to between 20km and 50km in Switzerland. The entire state of Luxembourg is part of an emergency zone even though there are no nuclear power stations on its territory. It’s due to the fact the Cattenom reactor in France is close to the border.

The duchy has previously forwarded to the European Commission a study commissioned by Germany's Greens party, which according to Luxembourg “listed the Cattenom plant's security problems”.

ANCCLI wants French authorities to work out a plan and carryout “digital simulations” for how Iodine tablets would be distributed to the whole of France before a radioactive cloud passes and also how the population would be evacuated in the event of a disaster.

The extent of the problems France would face in the event of a disaster are made clear by the fact more than 1.25 million people live within 30km of the Bugey power plant near Switzerland and over one million live around the Fessenheim power station – the oldest in the country.

Delalonde points out that India’s contingency plans are far more developed than they are in France.

“They anticipate the amount of food that will be needed, the number of emergency beds needed, blankets and even how many saris would be needed,” he said. Last month The Local reported how Germany had called on France to close the Fessenheim nuclear power plant.

“This power plant is very old, too old to still be in operation,” said a spokesman for Germany’s Environment and Nuclear Safety Minister Barbara Hendricks.

Meanwhile, the Swiss canton of Geneva on Wednesday filed a complaint against French nuclear plant Bugey located in the neighbouring French region of Ain, claiming that it “deliberately puts in danger the life of others and pollutes the waters”.