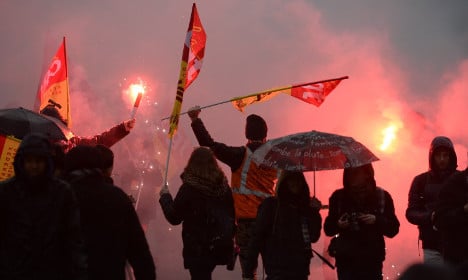 France’s labour laws bill is a real disaster. Not because it is necessarily bad in itself, in fact the opposite. What is worse is that an important bill can be so badly explained that it allows opponents to successfully develop ideas that we thought were dead years ago.

The essential principal of relaxing France’s stringent constraints on hiring and firing is now in danger of becoming an absolute taboo for a very long time. Even if the law is finally adopted, it will be in a watered down form and even though it will be modest, no government will ever dare to return to this issue.

Just before the announcement of the bill François Hollande had rightly raised the fight against unemployment as a matter of national emergency. Some said it was too late but at least the passage of such a bill could pave the way for bolder action by governments in the future. But in fact just the opposite is happening.

To repeat the logic behind the bill, we know that one of the reasons for the mass unemployment in France stems from the difficulty in laying people off. This might seem paradoxical but it has been established by countless scientific studies.

Of course there are always ideologies that claim the world is flat or that Darwinism is a fraud but they only deceive those who share their bad faith.

A company that hires has to envisage the fact that its growth figures may end up disappointing. The firm will then have to backtrack. But if reversing is impossible because it’s too costly and too risky, the company will simply prefer not to hire staff and let the opportunity to grow and develop pass by.

The French labour laws bill is therefore a step, albeit a small one, in the right direction. Limiting compensation pay-outs by employment tribunals that dared to hire staff is useful, even if it would have been even better to do away with their involvement altogether. After all the contracts themselves already allow for compensation, and if necessary that compensation can be reviewed.

But the advice of the tribunals is a vital instrument of power for French trade unions, that have almost disappeared in the private sector. The same can be said for industry sector agreements, which are applied obligatory to all companies in that area after being negotiated with unions who only represent a tiny minority of workers, and are often absent in small and medium sized companies.

Recent worker referendums at Smart and Goodyear show that employees sometimes actually disagree with unions. Deviating from sector agreements after consulting with employees is the mark of social democracy.

French trade unions feel threatened and they are right to. But is this all about defending the rights of trade unions or fighting mass unemployment? Social democracy is a way of changing the French union movement, which is almost unique around the world in its rejection of the economic realities. (Myriam El-Khomri, the country's underfire labour minister in an article by L'Express newspaper.)

Another key way of reducing unemployment in France is to make the rules around layoffs for “economic motives” more flexible.

Of course there will always be abuse by employers, but in the vast majority of cases, laying people off is a failure that companies want to avoid. In other words, companies almost always lay off staff for economic reasons.

Curbing abuse by employers is one thing, but criminalizing all layoffs is another.

Opponents of the reform have built their arguments around insecurity, which is extremely clever, but superficial. Because precariousness or insecurity has two origins.

Firstly, the existence of mass unemployment.

In a country like Germany or England, being dismissed or laid off is not really a problem because you can quickly find another job. But by blocking measures that reduce unemployment, opponents of France’s labour reform bill guarantee that a major cause of insecurity continues to exist, all in the name of fighting insecurity.

The other source of insecurity in France is the CDD temporary contracts.

But opponents of the labour reforms, who are not even daring to take the plunge, do not want to hear about [getting rid of CDDs and moving to a single job contract] because they adamantly refuse to touch the CDI permanent contracts – even though the handing out of these permanent contracts has become the exception in France.

It’s almost as if the opponents of the law want to keep the insecurity in France because this is their only trading power.

By nature, businesses are insecure. Every year in France, around 20 percent of all businesses open or close their doors. As a result jobs are created and jobs disappear. It’s normal. What matters most is to reduce the amount of precariousness. The solution, which has been put in place in other states, is to protect the people and not the jobs, which are always going to be uncertain.

One solution is to help compensate unemployed people by helping them do what it takes to get back into work as soon as possible.

But the best solution is to dramatically reduce unemployment. This is the aim of the labour reforms, which appears to have been completely forgotten by those marching against it.

When you look at these protests you can be struck by the number of public service employees, who are not even affected by the law. Where are those people who will be affected – those who work in the private sector?

The reason the essential message of these reforms has not got across to the public has more to do with the collapse in confidence towards the French president and the paucity of the government’s arguments.

What is really serious for the future is that the French still don’t understand what needs to be done to fight unemployment. All politicians should be alarmed. The media too, for that matter.

Charles Wyplosz is a professor in international economics at the Centre for International and Development Studies (IHEID) in Geneva. His opinion piece first appeared in French in the Le Figaro newspaper. You can read the full version by clicking here.