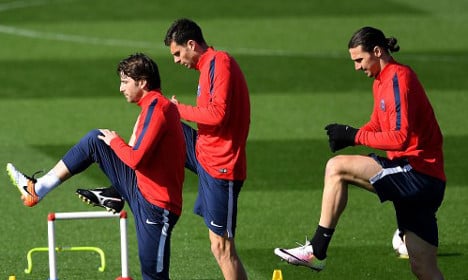 Paris Saint-Germain coach Laurent Blanc has warned his much-fancied side that they must not be overconfident heading into
their Champions League quarter-final, first leg against Manchester City at the Parc des Princes on Wednesday.

The recently-crowned French champions are looking to reach the semi-finals of this competition for the first time since 1995 but this is their fourth season running in the last eight, while City have never before been at this
stage.

That has led many observers to give a polished PSG side, deserved winners against Chelsea in the last 16, the label of favourites to beat Manuel Pellegrini's men after they were relieved to avoid being drawn against Barcelona, regular rivals in Europe in recent seasons.

“All the little details are important in ties like these and the experience we have accumulated in the last few years could play a part,” Blanc told a press conference at the Parc des Princes on Tuesday.

“What I see is that when the draw was made, everyone, including us, was satisfied to avoid the two ogres of European football at the moment in Bayern Munich and Barcelona.

“You could maybe include Real Madrid in that, so once we avoided these three teams I feel like the media and all the supporters thought, well it's an easy draw, but it is absolutely not.

“The players mustn't listen to anyone saying that because those people don't understand anything about football.

“City's project is sort of parallel to ours. They have talented players in every area, great quality and quantity of players.”

Those similar projects that Blanc talks about have seen extremely rich Middle Eastern investors come into both clubs in recent seasons, transforming them from also-rans into leading forces at home and abroad.

Qatar-owned PSG have become France's dominant club and made rapid progress abroad since being taken over in 2011, while City have won two Premier League titles since being bought by the Abu Dhabi United Group in 2008, although have toiled at times in Europe.

Pellegrini's side reached this stage by beating Dynamo Kiev in the last 16 after falling at that hurdle against Barcelona in each of the previous two campaigns, so the Chilean took no offence at Blanc's comments.

“The last two seasons we couldn't continue further in this competition because we played against a very strong team of Barcelona,” Pellegrini said after arriving in the French capital.

“We have played Bayern in the group stage before — they are important teams with big names who are used to being at this stage.

“I understand why Laurent Blanc doesn't want to play them but I think they have a lot of respect for our team.”

PSG's prospects are not helped by the absence due to injury of Marco Verratti and Javier Pastore, but former Manchester United star Angel Di Maria is fit after picking up a knock playing for Argentina last week and missing
Saturday's 4-1 win against Nice.

City have Yaya Toure, skipper Vincent Kompany and Raheem Sterling on the injury list but Pellegrini declared Joe Hart fit after the goalkeeper trained on Tuesday.

“Joe worked without any problem the last day,” Pellegrini said of Hart, who injured his calf during City's 1-0 home defeat by Manchester United on March 20.

“Of course you always have risk with players when they are coming back from injury but we made medical tests with Joe and he doesn't have any problems.”

In addition, Pellegrini has Kevin De Bruyne available after the Belgian made his comeback from injury and scored in a 4-0 win at Bournemouth at the weekend.

PSG's biggest concern, though, will be finding a way of stopping City's star man Sergio Aguero.

“Kun is a magnificent player,” said PSG defender Maxwell. “He has so many qualities and is like Romario was for Brazil, small and strong.

“We need to make sure he doesn't have space in which to make the difference.”