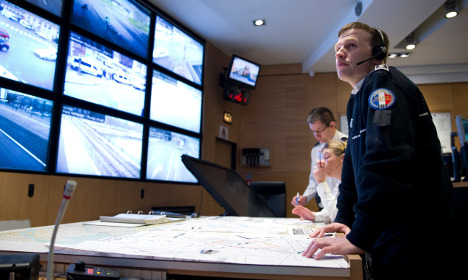 Photo: AFP
The move will see CCTV cameras installed at 70 of the most heavily-frequented bus stations across the wide Paris region.
The stations, which remain unnamed as yet, are considered “sensitive” by officials, and serve more than 400,000 users per day.
The plans were announced on Tuesday in a meeting between Interior Minister Bernard Cazeneuve and France's secretary of state of transport Alain Vidalies.
They also announced plans to create a joint headquarters for police and train security officials in a bid to “reinforce the speed and efficacy of interventions”, reported the Direct Matin newspaper.
Added security will no doubt come as a welcome relief to many Parisian commuters.
A survey in 2014 found that only half of France's commuters say they feel unsafe when using public transport.
Aside from the heightened threat of terror in Paris, the capital has played host to shocking incidents in recent history, including when a women was raped in daylight on the RER and another that saw a gang of young robbers storm a train near Paris.
More recently, a teenage American students was sexually assaulted on the Paris Metro as she made her way home.