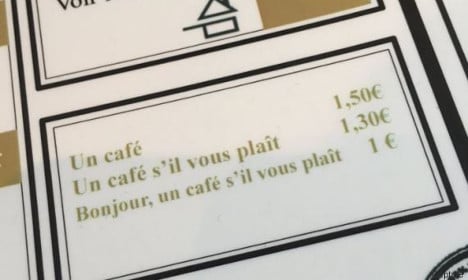 We all know the stereotype of the moody French waiter.

Visitors to France love to complain about the substandard customer service and the grumpy demeanor of café servers.

But photo evidence suggests cafe and bar owners are turning the tables and suggesting that it's the customers who need to be more polite.

The images suggest that some French café and restaurant owners are fed up with customers forgetting their manners, making demands without even bothering to say hello or please.

The restaurateurs are making their point by making some not-so-subtle tweaks to their menus.

The snap below went viral on Reddit, a social network that is essentially an online bulletin board. Taken from the menu of a restaurant in Grenoble in southeastern France, the picture shows that the cost of your cup of coffee depends on how politely you order it:

A quick Twitter search turned up many other examples of similar cheeky menus with price cuts for a bonjour and a s'il vous plait.

So for the cheapest price and the goodwill of the café owner, your best bet is to bookend your order with a “hello” and a “please”. Not too hard, right?

One restaurant owner in southeastern France told French newspaper Le Messager the move had a positive impact in his own restaurant.

“I said to myself that nobody will get offended, au contraire. They walk in, they look at the sign and don’t understand. Then you see the expression on their face change, they have fun with it, and it really makes everybody laugh. It had the impact on people that I wanted,” he said.

However in the comment section of the viral thread, non-French Reddit users debated the usefulness of such a rule.

One user said said, “I like it, and the people raising a stink about it really couldn't be more than just a gaggle of sourpuss ass wipes. Think about it, protesting a discount in which you only have to be polite to get? Are you unable to feign kindness for ten seconds?”

But another user said that customers shouldn’t have to feign kindness. “I just wouldn't like being blackmailed into being polite,” he wrote. “Not because I don't like being polite – I already do my best to be a pleasant customer without the monetary incentive.”

But many French café owners seem to like the idea.

A snapshot of the menu from the Petite Syrah restaurant in the Riviera city of Nice was one of the first to go viral back in 2013. The manager, Fabrice Pepino, told The Local at the time: “It started as a joke because at lunchtime people would come in very stressed and were sometimes rude to us when they ordered a coffee.

“I know people say that French service can be rude but it's also true that customers can be rude when they’re busy,” he said.

Although Pepino admits he’s never actually had to enforce the price scheme, he says he has noticed a difference in his customers’ behaviour.

“Most of my customers are regulars and they just see the funny side and exaggerate their politeness,” he said, adding “They started calling me 'your greatness' when they saw the sign.” Rude, or more polite than you?

Maybe we non-Frenchies shouldn't be so astonished about this uproar over politeness.

Despite their international reputation for being rather rude and brusque, the French highly value basic politeness and common courtesy.

They stick by by rather strict unwritten codes of conduct (actually sometimes they are written) for basic everyday interactions, from dinner parties to the workplace.

If you frequent French cafés, restaurants, shops, bakeries, doctors' waiting rooms, etc, you’ll know that a bonjour upon entering or speaking to staff is almost mandatory. It's even a faux-pas to forget to greet people at times and may elicit a sarcastic “bonjour” before they respond to your demand.

If you forget or you’re in too much of a hurry for a quick “hello”, it’s seen as rude.

So, the next time you pop into a French café for a coffee, remember that a quick bonjour and a s'il vous plait can save you money and probably get you better service. 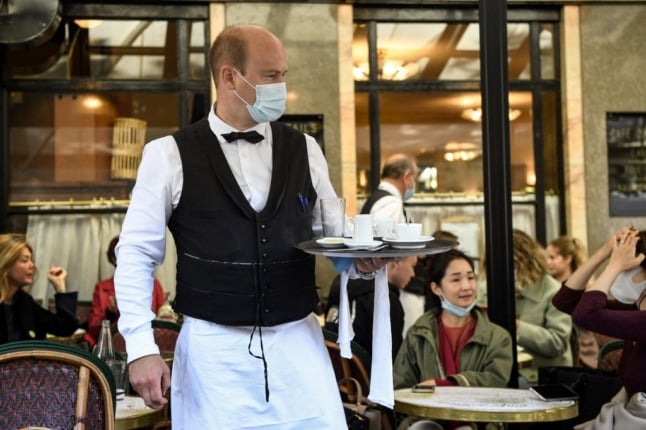 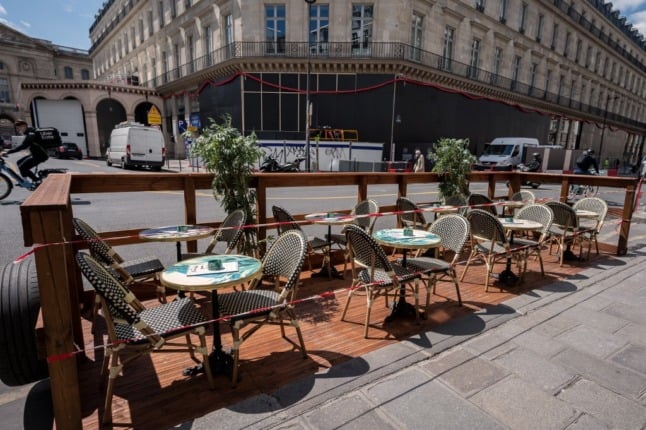 ECONOMY
‘Fully booked for a month’ – France’s bars and cafés prepare to reopen after six months of closure
Url copied to clipboard!