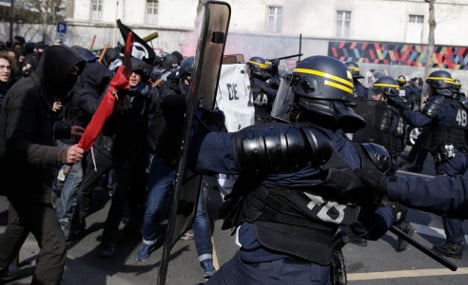 Students, many covering their faces, could be seen hurling objects at police on the streets of Paris, who responded with tear gas and baton charges.

The scenes echoed those of last Thursday when similar protests saw trouble erupt in various cities across France. On Tuesday Police said 130 people were arrested as the trouble flared.

Officially the movement is in protest against the planned labour reforms that are aimed at freeing up the country’s rigid jobs market, partly by making it easier for companies to sack workers. The bill was set to be presented to parliament on Tuesday.

However in many cases there appears to be a minority who are simply intent on confronting the police.

For the fourth time in less than a month, youths were seen in running battles with riot cops, who came under a hail of bottles and rocks. Slogans such “police everywhere, justice nowhere” and “everyone hates the police” were shouted at officers, who once again lined up behind their riot shields. Many of them were covered in white paint, thrown by protesters. Local shopkeepers pulled down their shutters as the melee approached. Hundreds of pupils converged on the Place de la Bastille from where the main march set off.

Relations between youths and police in France have always been fraught and reached their lowest point during the 2005 nationwide riots, sparked by the death of two teenage boys who were being chased by police.

A shocking incident during a recent protest against labour laws, when a police officer was caught on camera punching a high school pupil in the face, has only made the atmosphere more tense as certain pupils have sought revenge.

Earlier on Thursday smoke could be seen rising from a high school in Levallois, to the west of Paris after pupils set fire to bins.

Once again a number of schools across the capital were blocked, although fewer than during last week’s protest.

The Socialist government is desperate to push through reforms to France's controversial labour laws, billed as a last-gasp attempt to boost the flagging economy before next year's presidential election.

Unions and students are angry over the plans to make it easier for struggling companies to fire workers, even though the reforms have already been diluted once in a bid to placate critics.

In between, several ministers including Education Minister Najat Vallaud-Belkacem have agreed to meet with youth groups.

In the southern city of Marseille, protesters overturned rubbish bins and threw eggs during a demonstration that drew around 1,500, according to police.

Last Thursday some 400,000 people protested across France and students forced the closure of some 200 schools.