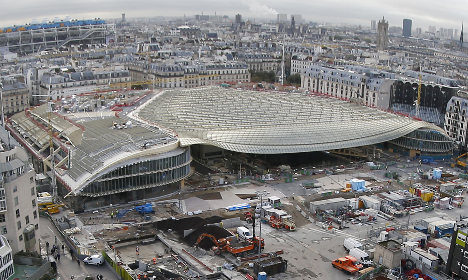 Paris Mayor Anne Hidalgo inaugurated the centre and its impressive 2.5 hectare Canopy at 1pm on Tuesday before it opened to the public.

Hidalgo herself has said the area, which she said was once an “architectural disaster”, will soon become the new beating heart of the City of Light.

From above, the Canopy looks like a gigantic, leaf-shaped spaceship that has landed in the middle of Paris. Designed by architects Patrick Berger and Jacques Anziutti, it’s inspired by plant life.

As big as the Place des Vosges in the Marais, the new commercial center holds a media library, hip-hop center and recording studio, an auditorium, and a plethora of other cultural amenities.

And it’s just one part of a billion-euro overhaul of the commercial center currently known as the Forum des Halles, or more often just “Les Halles”.

Les Halles is a largely underground shopping mall connected to major metro/RER transport hub Chatelet-Les-Halles. It occupies the spot of what was once a 10th century food market nicknamed “The Belly of Paris” by writer Emile Zola.

In the 1960s, the market was moved to Rungis in the southern suburbs after outgrowing its central Paris location.

For the past five years, there has been a massive undertaking to reorganize and modernize the commercial center.

Jean-Louis Missika, an urban planning adjoint, says that the renovations “will allow Paris to step into the 21st century”.

One of the main goals was to lighten up the ambiance of the interior.

“We lightened up the hallways, raised the height of the roof, and got rid of the false ceilings typical of the 1970s to give more space and more light,” said Christophe Cuvillier, president of Unibail-Rodamco, the owner of Les Halles.

But even with the inauguration of the Canopy, the work is far from over. In fact, construction isn’t expected to be completed until 2018, with a metro-RER station, garden area, and pedestrian zones still to be finished.

The Canopy aims to be a welcoming urban environment, blending retail shops with 3,870 square metres of playgrounds for children, and even more space for lawns and benches.

37 million: The number of visitors the commercial center currently sees each year. But the owner of the new and improved Forum des Halles hopes that number will grow to around 40 million as a result of the extensive overhaul.

If that estimation is correct, the commercial center would become the second most-visited in continental Europe after Les Quatre Temps in La Défense, the business district northwest of Paris.

75,000: The number of square meters that the new Forum des Halles will cover, 15,000 of which are from the recent and ongoing construction. More than 70 percent of the space has been renovated.

8: The number of rooms that will be added to the UGC cinema.

6,000: The total number of square meters dedicated to cultural amenities, “probably the largest concentration of cultural amenities and establishments in Paris and even beyond,” according to Bruno Julliard, adjoint to Culture.

The new Forum will also be home to an amateur artist community with a studio and practice rooms for music, dance, and theatre.

The media library will also include two 3D printers, a manga bar, and a W.A. Mozart conservatory with 27 music rooms, three dance rooms, and a dramatic arts studio.

6,300: Square meters that will be occupied by shops.

13: The number of entrances to the new Les Halles, four more than before. Five of these entrances will come from the metro and RER and eight from outside.