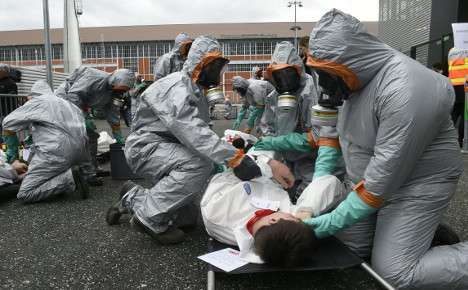 Interior Minister Bernard Cazeneuve and Health Minister Marisol Touraine both assisted at the exercise at a fan zone in the western city of Bordeaux which mobilized 600 fire fighters, police, army, and emergency services.

It followed an earlier exercise simulating a chemical attack at the Stade Geoffroy-Guichard in Saint-Etienne which will host four matches.

“We want Euro 2016 to take place in the best conditions and that's why we're multiplying exercises to test the systems put in place to quickly intervene in a context where the threat is extremely high,” said Cazeneuve.

The scenario chosen in Bordeaux was one where three armed terrorists were firing into the crowd waiting to enter the fan zone.

One triggered an explosion in the middle of the crowd, while another took hostages in a building, causing the intervention of the specialized police intervention unit, the RAID.

“The challenge is to know how we can support a large number of victims in a region where the hospital facilities are not of the same nature as in Paris where there is the biggest hospital in Europe.

“We have plans in place for different regions to work together.” The time chosen on Monday evening was to coincide with the retransmission of a match on a big screen at Bordeaux's Place des Quinconces which could be watched by 62,000 people.

Bordeaux will hosts four group-stage matches as well as a quarter-final in the tournament which starts on June 10th. At Saint-Etienne (see photos above) some 120 firefighters, more than 60 police officers, and 20 ambulance workers took part in that exercise, along with 450 other people.

“The goal is to test the coordination between the different services,” said lieutenant colonel Bertrand Baray, of the Pays de la Loire county fire and rescue service.

“The NRBC (nuclear, radiological, biological and chemical) agents are positioned near the stadium in protective clothing with the aim of sorting people into three categories.

“They are those that are involved but do not have symptoms, those with symptoms but who can walk, and those who have symptoms and cannot walk.”