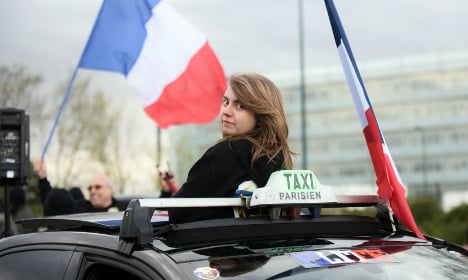 Protesters in the Toulouse taxi strike on Monday. Photo: AFP

French Transport Minister Alain Vidalies met with taxi and private cab representatives on Monday and suggested plans for a new fund that would compensate taxi drivers for what they've paid for their licences.

The plan, created by think tank Terra Nova, would come at a cost of €4.5 billion – or an average of €135 per driver per month – and would be financed “by all stakeholders in the sector”.

“The idea is to compensate taxi licence owners for what they have actually paid,” Romain Perez, who authored the study, told The Local.
He explained that this compensation would take into account inflation, and that drivers would not be paid for the market value of licence, which is higher and reflects speculation.
Perez added that the discussion was about the volume of licences to be repaid, the actualization rate, and the future of taxis in general.

The exorbitant cab licence fees – which cost up to €240,000 – are one of the main points of frustration for taxi drivers, who are irate that firms like Uber drivers do not have to pay the fees.

Traditional taxi drivers fear they won't be able to sell off their licences when they retire, as many drivers have done before them.

The concept of a new fund hasn't gone down well, especially not in Toulouse, where cabbies have already been on strike since early on Monday morning. Protesters in the Toulouse taxi strike on Monday. Photo: AFP

The head of Taxis de France, Ibrahima Sylla, announced that the traffic disruptions would continue in the southern city on Tuesday and could get seriously worse.

“We won't hesitate to take the Euro 2016 hostage and block all the football games,” he told France Info, referring to the Uefa football championships that will be held in June across France, including in Toulouse.

Monday already saw congested traffic across the city after taxi drivers parked their cabs around the airport, bus stops, and tramways.

Protester numbers have been bolstered by taxi drivers descending on Toulouse from all over France and beyond. Organizers said cabbies have been joined by colleagues from as far as Spain and Belgium.

The protest, the likes of which have been held right across France in recent months, is motivated by anger towards private cab firms and web platforms like Uber, which traditional taxi firms see as benefiting from unfair competition.

Protesters want the status of minicab to be scrapped to level the playing field and for taxi firms to be allowed exclusive use of geo-localization on web platforms.