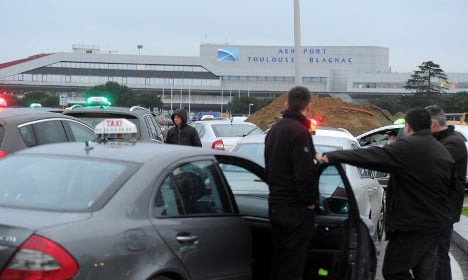 Travelling in and around the south western city looks set to be troublesome on Monday with taxi drivers having set up road blocks at strategic parts of the town.

The blockades were put in place at around 5.30am around bus depots and tram stops, as well as around the Toulouse-Blagnac international airport as the protest aimed to bring transport in the city to a halt.

Blockades were also set up around the Airbus airport and the city’s ring road. Monday will see various “go-slow” operations as taxi drivers’ unions promised the Ville Rose a “day of jams”.

“Today there will be no bus and no tram,” a union source told Le Figaro newspaper.

Protester numbers have been bolstered by taxi drivers descending on Toulouse from all over France and beyond.

“We haven’t even counted. The Parisians are there, drivers from Marseille and Brussels too. The Spanish and drivers from Lyon will come too,” said Stephane Abeilhou, a spokesperson for the Defense of Taxis association.

“We hope this protest is historic, because it’s the first one to only take place in a regional city,” he added.

The protest, the likes of which have been held right across France in recent months, is motivated by anger towards private cab firms and web platforms like Uber, whom traditional taxi firms see as benefiting from unfair competition.

Monday’s protesters want the status of minicab to be scrapped to level the playing field and for taxi firms to be allowed exclusive use of geo-localisation on web platforms.

Monday’s protest coincides with a meeting in Paris between French Transport Minister Alain Vidalies and representatives from both taxi firms and mini cab companies.

Taxi drivers have warned their protest could be extended into Tuesday if their demands are not met.