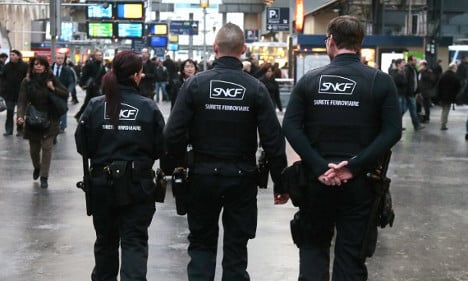 After local police, off duty officers and security guards, plans have now been announced that will see plain clothes teams who patrol trains in France carrying guns.

The move, which was announced on Sunday by SNCF chief Guillaume Pepy, is in response to the terror attacks in Paris and Brussels.

Pepy announced that the budget for security on SNCF trains will increase by 50 percent to around €400 million.

More metal detector gates will be placed on platforms but the stand-out measure is the plan to arm 3,000 guards who patrol trains and platforms undercover on the country’s network.

They will supplement the security teams, who patrol in uniform on certain lines, notably on suburban train lines around Paris.

“These agents will be trained how to shoot,” said Pepy.

The move is similar to the “sky marshals”, plain clothes offices who are based on certain flights, particularly on US airlines.

It also comes after news that France has moved to arm more local police, gave off-duty officers the right to carry arms and is mulling a plan to allow private security guards to carry a weapon.

“SNCF is changing,” said Pépy. “We won’t take the train in the same way anymore.”

As well as the plain clothes guards, there will also be more security gates at platforms, despite critics having dismissed the measure as useless and pure “security theatre”. The metal detectors will be placed at Marseille as well as at stations in Paris like Montparnasse.

Despite the criticism, Pépy said it was out of the question that the gates set up on the platform of Gare du Nord for certain international trains would be taken down.

One of the criticisms with the plan was that the gates were not installed at stations in Amsterdam, Brussels or Cologne – the destinations for the trains – making the measure seem pointless, but Pépy insisted talks with foreign governments were underway.

SNCF guards will also be able to search through passengers’ luggage when they arrive at stations. Around 30 more sniffer dogs will be put into action at stations and SNCF will also boost its technology – notably CCTV cameras that can automatically detect suspicious behaviour.

France continues to roll out more CCTV cameras on its transport system with the region of Provence-Alpes-Côtes d’Azur already counting 40,000 on its train network.

A new law has also given SNCF powers to increase their internal security by allowing them to investigate staff suspected of being radicalized.