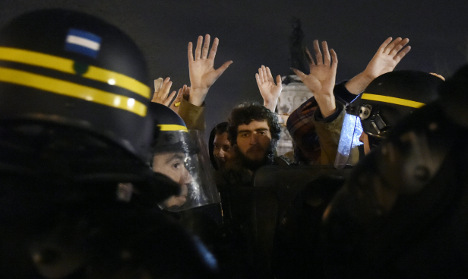 Photo: AFP
So what's been happening?
For the past four nights, crowds have been gathering in public squares across France, including Place de la Republique in Paris, and staying there throughout the nights.
They have a “general assembly” meet at 6pm where they discuss ideas and vote on whether to return the next night. And they're quite a peaceful group, they wave their hands rather than clapping for instance – which is surely a welcome relief for anyone living nearby and trying to sleep.
The groups get moved on by police each morning, then return soon later that day. The movement has been given the name “Nuit Debout”, which roughly translates as  “Rise Up at Night”.
How did it begin?
It all started last Thursday, after protesters took to the streets all over France to show their solidarity against new labour reforms.
While the overwhelming majority of these protesters went home after the protests, some simply stayed to form the “Nuit Debout” movement.
So why are the there?
Because they have a big, and somewhat vague, anti-establishment dream. It's become a lot more than just about the labour reforms, in fact, and many have drawn parallels between the Occupy movement in the US, and the Indignados movement in Spain – both from 2011. Photo: AFP
France's protests on Thursday, which turned violent in some places across France, were against planned labour reforms that aim, among other things, to make it easier for companies to hire and fire staff.
Those in the Nuit Debout movement are taking things a step further than just the labour laws.
What else are they pushing for?
Their social media sites show that the protesters are against the controversial Notre Dame des Landes airport project in western France, and support the Goodyear workers who kidnapped their boss back in 2014.
They've also, among other things, rallied to demand the halt of the “home evictions” that begin after the winter break, when landlords can evicted tenants from their homes.
Some protesters have talked about reconstructing a system that “starts with the citizens”, claiming that they're unhappy with the way the French government is running the country.
Those protesters speaking with the French press have often asked just to be referred to as Camille, an androgynous name used as part of their “policy of vagueness”.
Who is protesting?
They're mostly younger people, with many students and workers groups on hand. But good luck finding names, they're purposely staying quite anonymous as well as avoiding specific demands.

Should we be taking this seriously?
Political scientist Gaël Brustier told Le Figaro newspaper that the movement has been “led intelligently since the beginning”.
“It's an emerging social movement and it's still fragile, but it's becoming more important one small step at a time,” he said.
He added that the protests had similar foundations to the enormous “15-M” anti-austerity movement from Spain in 2011, especially considering the occupation of a public place, the heavy use of social media, and the public debates.
He noted that young people were well aware that inequality in France is on the rise, job security is lacking, and that university degrees don't come with any kind of a job guarantee.
“A social movement is being born,” he said. Riot police in Place de la Republique, in Paris. Photo: AFP
So how do I join?
If you want to see the protesters, or indeed join them, you've got 25 spots around France to find them. The biggest of these is in Paris at the Place de la Republique, which boasted several thousand supporters over the first few nights. The rest of the venues are dotted everywhere from Lille to Marseille, Strasbourg to Nantes.
And they're proving popular. Even on Sunday night, four days into the protest, several hundred protesters were on hand at the Paris venue.
What next?
The protesters have only got permission to carry on until Tuesday night, so we can expect to see at least one more night of crowds.
But it's anyone's guess as to whether they'll push to continue for longer, or indeed change the face of France as we know it, before giving up and going home.