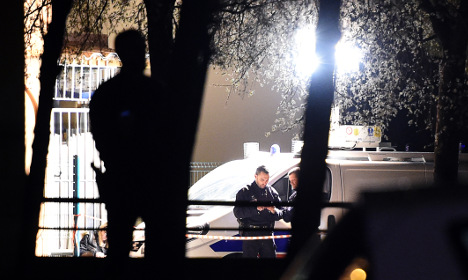 Police and forensics experts inspect a crime scene after three men were shot and killed in Marseille at the weekend. Photo: AFP
As much as the locals might tell you otherwise, Marseille has a gang and violence problem.
Three people were shot dead this weekend in what's believed to be a gang-related attack, taking this year's murder toll to eight.
This follows on from 19 last year, 18 in 2014, and 17 in 2014, many of which authorities believe were carried out by gangs linked with drug trafficking.
With this in mind, a plan has been put forward to keep Marseille pupils away from the violence, by literally cutting them off from the city with a wall.
The idea was the brainchild of French senator Samia Ghali, who is also the mayor of the 15th and 16th arrondissements in the city's northern suburbs that have been plagued by violence.
She told BFM TV that she was in the process of proposing a large wall at one of the schools to keep children safe from the gunfire outside school grounds.
“People are practising how to shoot Kalashnikovs in the streets,” she said, adding that the unnamed school in question “regularly” suffered from bullet holes in the walls.
She suggested an “anti-Kalashnikov wall” as a means to ensure no school children were hit by 'friendly fire'.
READ ALSO: Marseille – a must-visit or a murder capital?

The idea for a wall around the unnamed local school was met with mixed reactions from parents in the area.
One told BFM TV that he had seen shootouts from his apartment window, and said protection of his children was paramount.
“You never know, there could be a stray bullet or something and that concerns us,” he said.
Others ridiculed the idea.
“This isn't a good plan, you can't close in my children like prisoners. All we need now is a watchtower and prison guards,” said another parent.
Stamping out crime in Marseille is a government priority, although politicians are unable to agree on the best approach.
Socialist MP Patrick Mennucci argued on Sunday that legalizing cannabis was the best way to crack down on the drug trade.