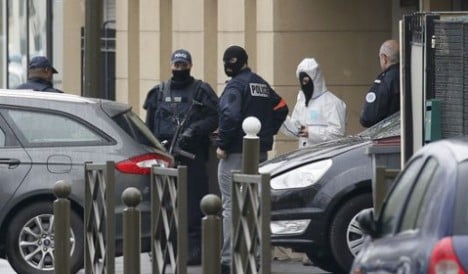 Belgian police. Photo: AFP
The prosecutors said that they had charged 35-year-old YA, but gave no further details.
“He has been charged with participation in the activities of a terrorist group,” the federal prosecutor's office said in a statement, adding that the development was part of a joint investigation by France and Belgium.
Two others – Abderrahmane A. and Rabah M. – are also being held in Belgium over the same plot.
The main plot suspect is Reda Kriket, who was arrested near Paris last week after police found an arsenal of weapons and explosives at his home.
Paris prosecutor Francois Molins said “no specific target” had been identified for the foiled attack but that the cache of weapons showed an imminent act of “extreme violence” had likely been prevented.
The Netherlands is also holding a French national in connection with the same plot and he is currently fighting his extradition to France.
European authorities have been under pressure to step up efforts to crack down on cross-border jihadist networks after close links emerged between the attackers blamed for the November Paris attacks and those behind last week's suicide blasts at the airport and a metro station in Brussels.
Url copied to clipboard!