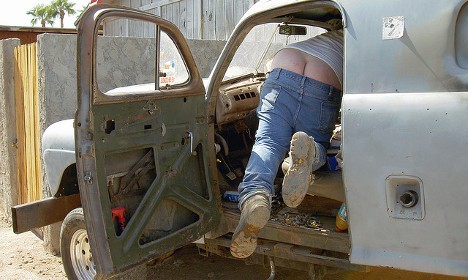 Here are ten of the weirdest stories The Local France has covered, which you might be surprised to learn were not published on April 1st.

“Women are better off without bras” says French scientist

A French scientist insisting women would be much better off if they ditched their bras sounds like a classic April Fools’ story, but he wasn’t winding anyone up. The happiest academic in the world is still carrying out further research, measuring hundreds of breasts to confirm his theory  .

A local resident said he thought he was “hallucinating” when an enterprising drug dealer offered him a reward card for regular custom. But the business venture, giving loyal clients a €10 discount once all ten boxes on the card had been stamped, was serious. A new rule forcing workers to to click on a toilet icon to alert their supervisors of their need for a break, and then waiting for permission before leaving their desks, sounds too ridiculous to be true. But employees at a French call centre threatened to strike over the very real measure, which required them to prioritize calls from customers over the call of nature.

Paris to become 'a model of cleanliness' in Europe

Even the most fanatic Francophile would have to admit that Paris is a rather dirty city, and that becoming Europe's cleanest would take a lot of work. A clean-up of the Canal Saint Martin uncovered all kinds of rubbish that had been floating around in its murky depths, and 350 tonnes of cigarette butts end up on the city’s streets every year. But the Town Hall launched the optimistic plan for the city's transformation with a straight face in February this year.

French manager paid to do nothing for 12 years

We all know the jokes about the relaxed French attitude to work and their beloved 35-hour week, but those who live here know that reality doesn't quite match the stereotypes. Except in the true story of a manager who received a monthly pay packet – and holiday bonuses – despite not working a single day for 12 years. And the manager in question demanded €500,000 compensation for the error.

France is known for being protective over its language, guarding particularly fiercely against the intrusion of Anglicisms into the vocabulary. But would it really go so far as to attempt to ditch the ubiquitous term ‘hashtag’ and replace it with ‘mot-diese’ (literally ‘sharp word’)? Apparently so. The French are famed for being romantic, but this invention – a pill to make bodily gases more fragrant – sounds too bizarre to be true. In fact it was the third smell launched by the company, which also sells rose- and chocolate-scented varieties. “Say it with love, flavour your farts with ginger,” was the Valentines product's slogan.

Another entrepreneurial Frenchman focussed his efforts on solving a different embarrassing problem, albeit affecting the same area. His creation? Underwear to cure builders’ bum. Though the story wasn't a joke, he was modest about his achievement, telling The Local: “It's not like I've found a cure for Aids – just for the builder's crack.”

'Jellyfish-lamb' ends up on French plates

Many French consumers probably wished it was an April Fool when it was revealed that a fluorescent-skinned lamb, bred for medical research, had been eaten by unsuspecting shoppers. But it actually happened; Ruby the lamb was genetically modified with jellyfish protein and was never meant to be eaten, but found her way to the abattoir by error.

Politicians can expect harsh criticism from the opposition and members of the public, but the mayor of Meaux probably thought he was being pranked when he was told that even the town's parking machines had turned against him. Unfortunately for him, it was true. The machines issued around 500 tickets calling him a “bastard, thieving mayor”, and he launched a legal complaint.