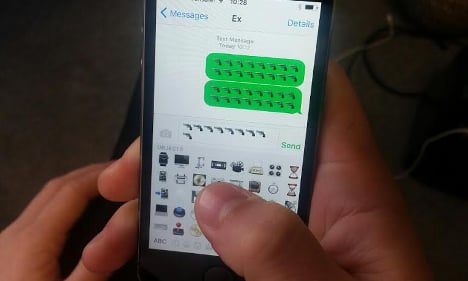 Photo: The Local
The 22-year-old man, who lives in the Drôme département of southeastern France, was sentenced to six months behind bars and told to pay €1,000 in damages.
The man is understood to have taken a break-up badly and then “inundated” his ex with a flurry of messages, including the gun emoji.
The judge ruled this to be a death threat “via image”, noting that it had left the girl too afraid to leave her home and having repeat nightmares, reported the Dauphiné Libéré newspaper.
The man's lawyer argued that a mere emoticon without context could hardly be considered a death threat, but the judge disagreed, sentencing the man to six months behind bars, three months of which were suspended.
While the penalty may sound harsh, the texter got off rather lightly considering the maximum sentence for death threats is three years of prison and €45,000 in damages.
In 2014, another jilted French lover was sent to prison after bombarding his ex with nearly 22,000 texts and phone calls. He admitted, in hindsight, that “it was stupid”.