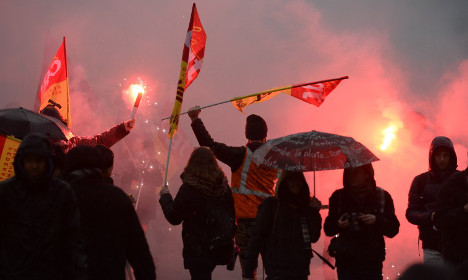 For the third time in less than a month, tens of thousands of French people took to the streets on Thursday to pressure the government to ditch a raft of labour reforms that businesses say are vital to boosting employment.

Previous protests have already forced the government to water down reforms that are aimed at making it easier for companies to fire and therefore hire people and marchers were hoping to bring about another embarrassing u-turn.

Protesters included high school pupils, students, workers and leftist unions  who say the package of reforms will do little to create jobs and by removing much-valued job security will take “France back to the 19th century” instead of forward.

Criticisms of the protesters, especially the young people, are that they are just demonstrating for the sake of it, have little knowledge of the reforms, and ignore the fact that unemployment among the youth is at 25 percent.

Say what you like about French protesters but they sure know how to make a bang. (Warning: loud) #greve31mars pic.twitter.com/8Olhjq6I7B

While a minority of protesters simply seemed intent on clashing with the police, which they did across the country, most had their anger trained on the government.

“The government thinks that flexibility creates work. Well they're wrong,” said Nicolas, who works at the museum of science in Paris.

“That's not what happened when they tried it in Italy and Spain. It just doesn't work. In France we know the employment level was good before 2008 and the financial crisis – or at least better than now,” he said.

Unemployment rates in both Italy and Spain have actually fallen in recent years although many dispute the drop was due to the impact of their own painful labour reforms.

A student named Albane, below right, summed up the view of many protesters who blame the high unemployment on businesses and banks rather the country’s notoriously rigid labour market. French workers will lose out and company bosses would gain once again, she said.

“We can't understand this law nor why the government wants to impose it. The same people stand to gain from the laws as always and that's the people with money, the CEOs,” she said.

She like many protesters said it wasn’t in the interests of France for unemployment to be reduced and the economy to grow if it meant greater inequality and more people living on poverty, as is feared.

“The law won't improve labour conditions. The government are just thinking just thinking economically and not for the benefits of the people. “Similar reforms happened in Germany a few years ago and now the economy is fine there but there is also lots of inequality and poverty,” said the student.

But she also echoed the kind of the idealistic comments made in recent weeks by those against the reforms, who fear the healthy French work-life balance is in jeopardy.

Other protesters accepted that when it came to protection for workers the French, compared to other countries, have it good. But rather than be willing to let a certain amount of job security go for the sake of cutting unemployment, they want to fight to keep what they’ve got,  knowing that once benefits go, it's hard to get them back.

“In France we have a special kind of system to protect the workers. We know we are one of last countries in world with this but I think it's important to resist and to keep it,” Xavier Garnier a teacher in Paris told The Local.

“The government's main explanation is that we must adapt to the rest of the world. But I think the world is going in a very bad direction and I think it's important for us to show we can resist and can keep these regulations from the fifties that are in danger of disappearing.”

“We are rich enough on this planet to give a good job to everyone – and I don't think it's utopian to say that,” said the teacher.

The problem that the government faces now is that bosses are also unhappy with the reforms, particularly over the removal of a cap on compensation paid for unfair dismissal, and the scrapping of plans that would have allowed small- and medium-sized companies to unilaterally introduce flexible working hours.

For the moment at least the government is standing strong.

“We must hold the line… and remember that we will get results and that France is an important country that matters in the world,” said PM Manuel Valls.