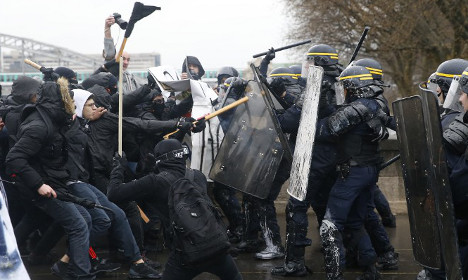 Trouble flared in France on Thursday as scores of protests took place across the country against planned labour reforms that aim, among other things, to make it easier for companies to hire and fire staff.

The protests coincided with strikes by air traffic controllers and Paris transport workers that are causing travel chaos for thousands of passengers.

Riot police were out in force to try to prevent scenes of violence that had marred the previous protests against the reforms.

But by midday there were reports of clashes between police and protesters at Gare de Lyon in Paris and in the western city of Rennes. Images and videos posted on Twitter showed police firing tear gas at youths after being pelted by objects including paint and flour bombs.

French media reported that several arrests had been made as tension mounted in several cities. Images from the western city of Nantes showed windows of banks and the City Hall had been smashed. Early in the day there were reports of around 50 schools in the Paris region being blocked by protesting pupils and 20 other high schools were closed after violence marred previous demonstrations.

However scores of peaceful marches were also taking place in towns and cities around the country.

Protesting dock workers had also blocked roads around the northern towns of Rouen and Le Havre as well as the Pont de Normandie.

Caroline de Haas, one of  the figureheads of the movement against the reform said there would be over 266 protests across  the country (see map below). Thursday's protests is the third day of action against the planned labour reforms. On the two previous occasions (March 9th and March 24th) the protests turned ugly in several cities across the country. Cars were burned in Paris and more than 30 people arrested as protesters clashed with police, who responded with tear gas.

A video of an officer punching a 15-year-old boy on the sidelines of a protest in the capital went viral and fuelled further anger. It emerged on Thursday that the officer in question had been detained over the suspected assault.

A battle is also raging within Hollande's ruling Socialist party, with many on the left of the party fiercely opposed to the reforms, billed as a last-gasp attempt to boost France's flailing economy before next year's presidential election.

Hollande has vowed not to run again if he cannot put a dent in the country's stubbornly high unemployment figures — long stuck at around 10 percent — and hoped the modest labour reforms would encourage firms to hire more people.

But pressure from the street and parliament's back benches caused the government to water down the proposals so that they only apply to large firms.

A recent poll found that 58 percent of the French public still opposed the measures.

Labour Minister Myriam El Khomri said this week that she understood why “such a profoundly reformist text has raised questions and requires debate,” adding that “it is not a blank cheque for companies.”

Bosses are also unhappy, particularly over the removal of a cap on compensation paid for unfair dismissal, and the scrapping of plans that would have allowed small- and medium-sized companies to unilaterally introduce flexible working hours.

Parliament is set to vote on the reforms in late April or early May.

The demonstrations are another challenge to Hollande's authority, coming after he on Wednesday scrapped the constitutional reforms he proposed following the Paris attacks, including a plan to strip convicted terrorists of
their French nationality.

In a blow to his faltering credibility, Hollande said an agreement between the two houses of parliament on the measures had proved impossible.