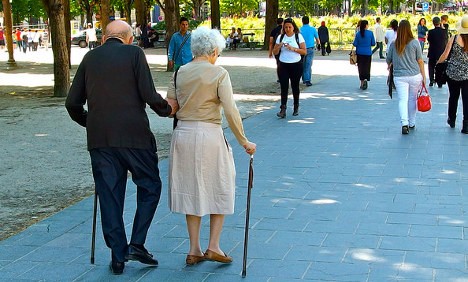 Photo: Allan Leonard/Flickr
The study suggested the younger generation would stand to gain from a reduction in the older generation's tax benefits, reported the L'Express newspaper.
And the younger generation could certainly use a hand, with the study pointing out a number of inequalities (when measured relatively) between today's youth and their predecessors, especially when it comes to jobs, housing, and public spending.
The think tank noted that France could learn from Germany, a country with an aging population, where pensions have remained the same between 1999 and 2013, while in France they rose by 53 percent.
As a result, Germany has managed to invest a lot more in education, for example, when compared to France.
The study also raised the question of whether the inequalities between generations were simply a default reaction, or more a result of the under-representation of young people when it comes to voters and elected officials.
France is facing a older population in coming years, with a study earlier this month predicting that by the year 2060 the country will have 32 percent of its population over the age of 60, compared to just 24.6 percent this year.
The change will be a direct result of the baby boom, which saw France's population soar for around three decades after the second world war.
As a result of the aging population, the study noted that there would be a dramatic shift when it came to the percentage of elderly people no longer working.
Currently, there's one person aged over 60 out of work for every 2.5 workers, but by 2060 it will be more like one for every 1.5 workers.