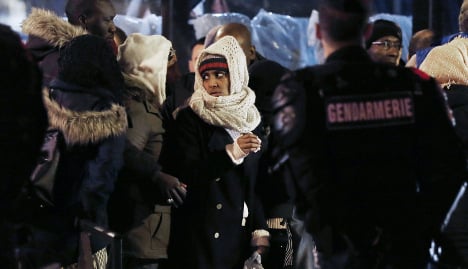 A woman stands as the Stalingrad camp is cleared. Photo: AFP
Police moved in at around 6.20am on Wednesday to clear the camp, which had been built by the entrance to the Stalingrad station and had been home to 985 migrants for three weeks.
“I don't know where we are going, but it will always be better than here,” Ahmed, an Afghan who said he was fleeing “the war and the Taliban”, told the AFP.
The migrants are understood to have come from Sudan, Eritrea, and Afghanistan, and Ethiopia – and included several women and children, reported French media.

The operation was carried out by the state services, the Town of Paris and police headquarters, and took around two hours.
The Stalingrad Metro station was closed to the public during the evacuation.
People living at the camp had been sleeping on old mattresses or even just cardboard, many with nothing but a plastic bag of possessions. Migrants from the camp were transported via bus to accommodation facilities in the suburbs of Paris, or outside of the city altogether, where they will be given a month to begin the process of seeking asylum.
The operation was the second at the Stalingrad station this month alone.
On March 7th, the camp had been cleared of around 400 migrants, although more migrants moved in within days.
The evacuation was the 19th of its kind in Paris since June last year, which has seen 6,500 migrants moved to emergency shelters.
More than one million migrants — about half of them Syrians — reached Europe via the Mediterranean last year, a rate of arrival that has continued through the first three months of 2016.
Germany has taken in the bulk of the migrants. Nearly 80,000 people applied for asylum in France in 2015.
In a bid to control the unprecedented flow of people into member states, the European Union has struck a deal with Turkey to return migrants crossing the Mediterranean.