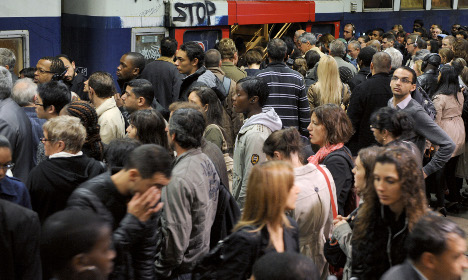 Photo: AFP
French Transport strike
The “one-day strike” by transport workers in the capital will kick off at 10pm on Wednesday and will run until 6.40am on Friday.
The industrial action was called by the CGT and Unsa unions, and is motivated by a wage dispute with the capital's transport operator RATP.
Transport chiefs have announced that the RER A and B commuter lines will be the hit, with only one in two trains running as normal. Passengers will be forced to change trains at the Nanterre-Préfecture station on the A line, and at Gare du Nord on the line B.

Commuters should prepare for delays, not least considering these two lines alone serve around 900,000 passengers a day.

The RER lines D and E will also only run at 50 percent of the usual services, while RER C will only run a third of the number of trains.
Other commuter services that serve Paris also face disruption (Lines H,J,R,U,L,N,P, K)
This will affect those travelling to and from the city's two airports – Charles de Gaulles and Orly which are both served by RER B. Passengers are advised to give themselves plenty of time to get to the airports.
As well as the RER lines, around a quarter of the Paris Metro trains will be out of action, however buses and trams will not be affected.
But if you are worried about getting around then maybe it's better to walk, as this map of walking times between Paris Metro stations suggests. The strike comes as both unions are rebelling against RATP’s refusal to agree to a general pay increase for its staff for a second consecutive year. The CGT said the decision “was particularly unacceptable given the historical financial results” of the RATP.
According to RATP, however, a general increase isn’t needed as the staff salary will increase by an average of 2 percent this year anyway thanks to individual pay increases. The RATP strike comes on the same day as the latest nationwide day of action in protest against the government's planned labour reforms.

The protest means that it won't just be transport services in the capital that face disruption.

While services on the TGV line that runs from Paris to the east of France will not be affected, only three out of four TGV trains will be running on the line from the capital to the Atlantic coast and the south east.

Only 50 percent of TGV trains will be running from Paris to the north of the country. Intercity and TER trains will also only be running around halve their usual services around the country, although the in reality the situation may be even worse in certain parts of  the country like the south east.

Eurostar trains and other international services however will not be affected by the strike.

The day of action will also see high schools closed in the Paris region as students continue to protest while some Air France flights may be delayed as workers join the movement.

The disruption to flights could be more widespread however with air traffic controllers also set to join the walk-out. Aviation authorities won't know how bad the impact will be until Thursday.

Demonstrations are planed to take place across the country, including one by hospital staff in Paris, who are also in a dispute with local health authorities over changes to their work patterns.

The CGT union says the government’s controversial labour reform bill “continues to diminish workers’ rights”, despite recent changes having been made to it.
After having stirred up much emotion among French workers, the government presented a watered-down version of the divisive proposal earlier this month, including scrapping a clause that would limit the amount of compensation a worker could claim if he or she had been sacked unfairly.
Also among the changes, small and medium-sized companies will not be able to unilaterally introduce flexible work practices into their working week.
In another slight modification to appeal more to the country’s unions, judges will be allowed to investigate whether multi-nationals are faking “financial difficulties” of the French subsidiaries just to be able to lay off workers. If they are, then the lay-offs will be re-classed as “unfair dismissals”.
The reform, penned by Labour Minister Myriam El Khomri, has deeply divided the Socialist government, pitting President François Hollande and Valls against a range of left-wing forces ahead of next year’s presidential election.
The reforms are part of efforts to combat stubborn unemployment in a country where employers are loath to take on permanent workers because of stiff obstacles to laying them off in lean times.