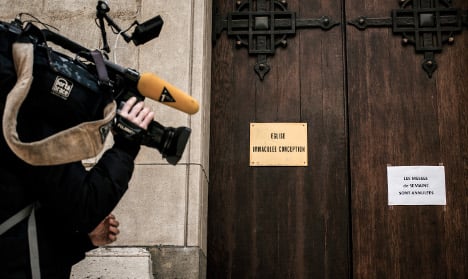 A sign on the door of the "Immaculee Conception" church reads 'Mass for this week have been cancelled' in Lyon. Photo: AFP
The diocese said in a statement that the Archbishop of Lyon, Philippe Barbarin, who is under fire over his handling of the affair, “has said repeatedly that he is prepared to cooperate openly with the investigation”.
The investigation is running alongside a probe into Bernard Preynat, the priest who has admitted sexually abusing scouts that he was supervising in the Lyon area of central France more than 25 years ago.
Preynat's victims have filed a formal complaint against the leaders of the French Catholic Church, accusing them of failing to inform the police of his acts when they became aware of them.
READ ALSO: Cardinal Barbarin: A hardliner at centre of sex abuse scandal Barbarin is also accused of failing to act against another Lyon priest when it emerged in 2009 he had abused a boy in the past.
“I have never, never, never covered up acts of paedophilia,” Barbarin said, adding that both cases had passed the legal statute of limitations when they were reported, adding an unfortunate “thank God”.
He later apologized for his choice of words.
It was not the first time Barbarin had to backpedal on his own comments.
Speaking out against gay marriage as protests swept France in 2012, Barbarin said: “Next thing they will be wanting couples of two or three people … then one day maybe, I don't know, the ban on incest will fall.”