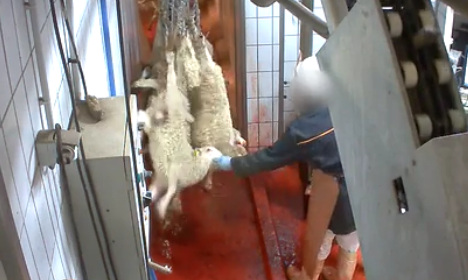 Photo: L214
France will launch a nationwide probe of its abattoirs to ensure all standards and laws are being adhered to after the emergence of a shocking new video showing cruelty to sheep and cows.
Animal rights group L214 released the video on Tuesday, this time filmed with hidden cameras at a slaughterhouse in the Pyrénées-Atlantiques département of south western France.
The video (below) was filmed over a week-long period before the Easter holiday, and was published on the L214 website – the latest in a string of videos released by the group.
“These are obviously some very shocking images, but they're not the first of their kind, unfortunately,” L214 spokesperson Sébastien Arsac told The Local, referring to two similar films to come out of French abattoirs in the last six months.
The Minister of Agriculture Stéphane Le Foll reacted by ordering the slaughterhouse to be closed, and for all of France's abattoirs to be inspected within a month.
The head of the abattoir said he was “disgusted” by the “unacceptable” treatment of animals, reported Le Point newspaper.
Watch the video below. Viewer discretion is strongly advised.
The video, above, shows workers repeatedly abusing sheep, bashing them over the head in an apparent attempt to knock them out.
One clip shows a worker literally throwing a lamb against a wall.
Other lambs are hauled by machines into the air by their hind legs while they are still conscious, leaving them struggling violently while suspended mid air.
Another clip shows several sheep strung up by their feet, bleeding and bleating, while another sheep watches on from nearby. One is quartered while still alive.
Towards the end of the clip, workers can be seen stabbing cows in the neck while they are strung up by their legs and are clearly still conscious.
One cow is even decapitated while still struggling.
And even though it appears the government reaction was strong, the team at L214 said that the it was nothing more than words.
“This is exactly what the former agriculture minister said back in 2010,” Arsac said. “They're obliged to react, but it's nothing more than a statement.”
He said the best reaction would be to install cameras at all abattoirs so experts could ensure animals were treated properly, and for consumers to eat less meat.
The horrific video comes after a so-called “animal-friendly” slaughterhouse in France was closed in February after L214 revealed shocking scenes of animal cruelty inside.
A spokesperson for L214 said at the time that the such cruelty could be fought by consumers themselves.
“We want people to aware, to think about their own responsibility, and of course, to think about stopping eating meat,” she told The Local.
“These animals are sentient beings after all, just like cats and dogs.”
In October last year, another video from an abattoir in southern France emerged showing even more gory footage of animal slaughter.