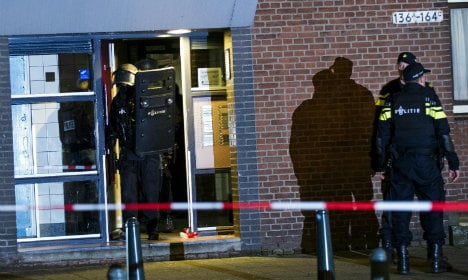 Dutch police at the scene of the arrest in Rotterdam. Photo: Marten Van Dijl/ANP/AFP

The prosecutor named the suspect as Abderamane A., who police shot in the leg after a stand-off at a tram-stop on Friday in the Schaerbeek district of Brussels.

The man had previously been sentenced to seven years in prison and banned from entering France for life for aiding in the assassination of the Afghan political and military leader Ahmad Shah Massoud in 2001.

The Belgian authorities on Saturday charged another suspect, Rabah N., with the same offence in connection with the arrest of terror suspect Reda Kriket near Paris two days earlier.

French police found arms and explosives in a flat Kriket was using and said they had prevented an attack from taking place.

Kriket was convicted in absentia in Belgium last year in connection with a network helping jihadi fighters go to Syria, along with Abdelhamid Abaaoud.

He is the suspected ringleader of the November 13th Paris attacks, which left 130 people dead, and is being held in prison in Belgium.

Tuesday's suicide bomb attacks at Brussels airport and on the city metro system left 31 people dead, plus the three bombers, and some 340 injured.

Prosecutors on Saturday laid the first charges in connection with the Brussels attacks against a suspect named as Faycal C., who faces counts of terrorist murder, attempted terrorist murder and participating in a terrorist group.

The announcement fanned speculation that Faycal C. might be the third airport suicide bomber who fled the scene, and a source close to the enquiry told AFP that investigators were working on this “hypothesis”.

Meanwhile, Dutch police on Sunday arrested a 32-year-old French national in the port city of Rotterdam on suspicion of planning a terror attack, prosecutors said, following a raid carried out at the request of French authorities.

The man is thought to have been planning an attack in France in the name of the Islamic State group along with Reda Kriket, a terror suspect who was detained near Paris on Thursday, a French police source told AFP.

The man arrested in the Netherlands had at one point travelled to Syria to wage jihad, the same source added.

“French authorities on Friday requested the arrest of this French national,” the Dutch prosecutor's office said in a statement, adding that the man was suspected “of preparing a terrorist attack”.

The statement made no mention of any connection with the November attacks in Paris.

The detained French national is expected to be handed over to France “shortly”, the Dutch prosecutors' statement added, a process that could take “several days”, spokesman Wim de Bruin told AFP.

In a statement late Sunday, French Interior Minister Bernard Cazeneuve praised the “meticulous” police work and “cooperation with our European partners” that prevented another attack on French soil.

Three other men were also detained in the police operations in Rotterdam Sunday, including two suspects of Algerian background aged 43 and 47. No immediate details were available about the third man.