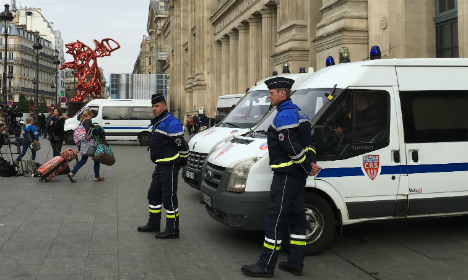 All photos: Louise Nordstrom/ The Local

The busy travel period also comes as police in both Belgium and France late Thursday announced they had carried out sweeping anti-terror raids near both capitals, arresting several people.

Following Tuesday’s deadly terror assault on Brussels’s Zevantem airport and the city's Metro system, France – still shaky after the November 13 attacks in Paris and under a state of emergency – quickly moved to tighten security at its own transport hubs. Some 1,600 extra police and gendarmes were immediately mobilised, including 400 just in the Ile-de-France region.

The day after the attacks, at least six police vans were seen parked outside the Gare du Nord train station in Paris. An officer who was standing guard at a bus stop near the entrance told The Local that the number of police officers there had been “doubled”.

Several groups of policemen and soldiers with machine guns were seen patrolling both outside and inside the station.

But despite Interior Minister Bernard Cazeneuve’s announcement that any future access to the country’s stations and airports would from now on be restricted to ticket-holders and those showing valid IDs, a reporter from The Local saw none of the “systematic” checks and searches the minister had spoken of.

Shawnik and Aditi Thakur, an Indian couple from Britain who arrived in Paris with the Eurostar, said that if it hadn’t been for the fact that they had booked their six-day sejour in the French capital already two months ago, the Brussels attacks would have prevented them from risking such a journey right now.

“What has happened has definitely put us off. We’ll think twice before booking our next trip,” they said, but noted that the visibly ramped up presence of security forces in Paris currently made them feel safer than in most places.

“But you can’t determine yourself safe anywhere now really, you just have to be more cautious. The fact that something could happen is always lurking in the back of my mind,” Aditi Thakur said.

Shawnik Thakur said that while travelling from the couple’s home in Reading to London the day before, he had noticed that he now reacts a lot more to what might be perceived as suspicious behaviour by fellow travellers.

“I was sitting next to this guy who suddenly decided to switch seats and briefly left his bag behind. I was getting ready to sound the alarm about it. This is something I wouldn’t have thought to much about before,” he said.

The Thakurs also said that while visiting Paris they are more likely to make their way around the city by bus rather than by using the Metro.

“There haven’t been any [recent] bus bombings, but then again, you’re up against suicide bombers who are ready to blow themselves up so how safe can you actually make yourself,” they said.

At Paris’s largest airport, Charles de Gaulle, security has also been enforced, with armed police patrolling in and around the terminals.

There were long queues at the airport's passport control Friday due to extra security checks.

An Air France staff member working in one of the departure areas told The Local: “Honestly we can't allow ourselves be scared to work in airport after what happened in Brussels.”

“For a start that's exactly what the terrorists want and secondly for the sake of the passengers we just have to carry on as normal.”

Marjorie, a 68-year-old British retiree who now lives in Burgundy and who was sitting in the departure lounge while waiting for her flight to Bristol, said she was surprised to find that there hadn’t been any checks when she had entered the airport, however.

“You just walk in with your bag and there's nobody stopping you or anything. I thought there would at least be people by the doors to check you,” she told The Local.

Marjorie, who lived in London during the height of the IRA bombing campaign in Britain and regularly heard blasts going off near her office, said she didn’t feel too worried when it came to French security, however.

“I think it's been shown already that they can prevent attacks. I do believe they prevent a lot of things that they never tell us about,” she said, adding she felt convinced that a number of undercover police officers were guarding the airport as well.

“And you shouldn’t just stay at home and look at four walls anyway.”

Jakob Hafsteinsson, a 23-year-old transit passenger from Iceland, said that the recent attacks in both Paris and Brussels hadn’t made him want to change his Easter travel plans to Slovakia.

“My mum got a bit worried and called me when I got here to check what the security was like, but no, it hasn't cross my mind to cancel the ticket. But I think I will be more careful in checking my travel destinations in the future.”

A total of 31 people died in the March 22 attacks in Brussels and 130 people in the November 13 assault in Paris. Several hundred people were injured.

Late Thursday, French police announced they had foiled a terror plot aimed at striking France and which was at an “advanced stage”. One person was arrested in the raid in the northern Parisian suburb of Argenteuil. Belgian police, meanwhile, said that six people had been arrested in an anti-terror operation in Brussels linked to Tuesday's deadly blast.

In a survey carried out earlier this week by Yougov for the free newspaper 20 minutes, 87 percent of the French people polled said they thought it was likely that another attack would hit the country in the next few months.

With the French government insisting the terror threat against the country has never been greater, it seems travellers in France will just have to get used to feeling nervous.