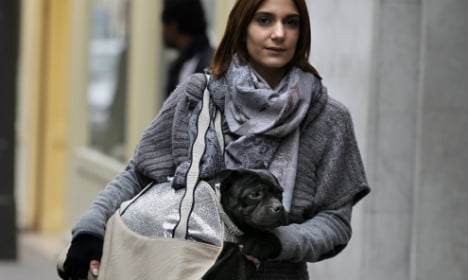 As anyone who has spent some time in Paris will know, dogs have a special place in Parisian society.  Most striking is the way that dogs accompany their owners to places usually exclusively reserved for humans, such as restaurants, shops and public transport.

Sure, we have all seen the exaggerated version of this cliché in films and TV shows, but there is a difference between seeing Carrie Bradshaw propped up beside a drooling Mastiff in a fancy tea salon and actually seeing how Parisian dogs trot about town on a daily basis.

When you see a dog attablé in a restaurant for the first time (note: I recently acquired the fabulous verb attabler, meaning to be seated at a table), it may come as a bit of a surprise.  Like this little guy below (an adorable teckel à poil dur), who I spotted just casually sitting up after dinner at the super cute Bistro Ernest. Far from his usual hobbies of chasing wild boars (sangliers) and digging holes but seemingly not bothered by it, this little teckel was more interested in deciding whether to have a dessert or just take the café gourmand (“C’est plus léger, non ?”). This was a truly Parisian dog.

Where I come from, dogs are not allowed in restaurants.  When I was home in Melbourne for Christmas recently, I was shocked that a café would not even let my dog sit on the terrasse out front of the restaurant, citing “Health and Safety regulations”.  Instead my poor pooch, much to his horror, had to be tied up on the other side of the footpath. Why are things different in Paris? One reason for the heightened canine presence (and acceptance) might be the size of peoples’ apartments. When your doggy is cooped up in a 30m2 apartment all day (and with no backyard), it’s only natural that you would want to take him out and show him the town.  Hence the presence of pooches in shops, offices, hair/nail salons, and everywhere in between.

But dogs don’t have free rein over the city, either. Rather, as I learned from chatting with a dog-owner recently, dogs are, somewhat ironically, banned from a majority of the city’s parks and green spaces. This might be another reason why they are allowed just about everywhere else.

Why the ban in parks? Well, from the dog-owners I have spoken to it seems to be the related to the petit problème of dogs doing their business. This seems like a plausible explanation. Parisian gardens are so beautiful, perfectly symmetrical and aesthetically pleasing, I can well imagine the authorities not wanting to tarnish that image with unsightly crottes de chien. And let there be no doubt, the Parisian authorities feel strongly about this. The fine for not picking up after your pup, at least in theory, is up to €450. To put that into perspective, that is ten times the fine for not having a valid metro ticket and nearly thirty times the fine for parking your car illegally (at the moment you face a fine of only €17; this is set to rise, but apparently now not until after the next Presidential election, #France).

So the incentive is there (at least when it comes to poop scooping), but do Parisians actually respect the rules?  Well, judging by the amount of crottes that litter the footpaths it seems not.  And you do occasionally see dogs in the parks where they are supposed to be banned, like this adorable little rule-breaker Henri who I saw out strolling in the Place des Vosges. I was told by Henri’s owner that if you break the rules and walk your dog in a garden where they are banned, you usually have around 7-10 minutes before the gardien (caretaker) of the garden comes and kicks you out.  In theory you could also face a fine but, like lots of good French rules, it seems that this is rarely enforced.

As for public transport, Parisian dogs are allowed to travel on the Metro if they pass the basket test.  Basically, if you can fit your dog into a small bag or basket (panier) then it can travel with you.  Just ask this little panier-sized guy (below), out for his morning commute in his raincoat. Or this little one out riding the rails on a Saturday afternoon: The basket test also applies for SNCF trains outside of Paris, except the dog must also weigh 6kg or less (otherwise he has to be on a lead, muzzled and pay half the price of a regular ticket).  A similar rule applies for Air France flights (the dog must weigh 8kg or less to travel in the cabin with you).

This article originally appeared on the blog “You know you’re turning Parisian when…”  It's a new blog about those moments when you realize you’re turning that little bit more Parisian.  You can find more posts here.