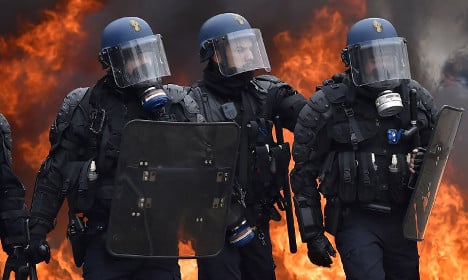 Students and youth activists clash with police in Paris and Nantes. Photo: AFP

Fifteen protesters were arrested in Paris, where two policemen were injured, and another nine students were detained in the western city of Nantes.

The reforms, which had been significantly watered down under pressure from an earlier wave of protests, were adopted on Thursday by the cabinet of an increasingly unpopular President Francois Hollande, who hopes to stand for
re-election next year.

“Young and insurgent, the world is ours” read one banner as some 5,000 protesters gathered at Place d'Italie in the south of the French capital, where students torched two cars, threw bottles at riot police and emptied a rubbish bin over other officers.

Protests were also staged in other cities, including Marseille, Bordeaux,Toulouse and Lyon.

Students have been at the forefront of protests over the reforms aimed at freeing up the job market and reining in France's 10 percent unemployment rate.

Among youths, joblessness is nearer to 25 percent — among the highest in Europe.

The youths, along with unions and the left flank of Hollande's Socialist Party, say the reforms are too pro-business and threaten hallowed workers' rights. Prime Minister Manuel Valls has touted the reforms as “intelligent, audacious and necessary” in the face of stubbornly high unemployment, which has not dropped below seven percent in 30 years.

“Our country has become used to (joblessness) for too long,” he said.

The pressure from opponents prompted the government this month to water down the contested reforms, walking a tightrope between the insistent demands of employers and employees.

But bosses are unhappy with the withdrawal of a cap on the amount companies must pay for unfair dismissal, as well as the scrapping of a measure that would have allowed small- and medium-sized companies to unilaterally introduce
flexible working hours.

While employers' groups called on Valls to restore the reforms' original goal of creating jobs, the concessions were enough to persuade several so-called “reformist” unions to get behind the new version while still urging
new language on conditions for laying off workers.

The seven unions and youth groups that organised Thursday's protests are demanding the withdrawal of the reforms.

A high school protester in Marseille carried a banner reading: “A great leap forward towards the 19th century”.

Last week students paralysed dozens of schools and universities across France, and on Thursday students were again barricading campus entrances in Paris.

The government's proposed reforms are scheduled to be taken up by parliament's social affairs committee on April 5, and by the full body in late April or early May.

Before that, the protest movement plans an even bigger mobilisation for March 31.