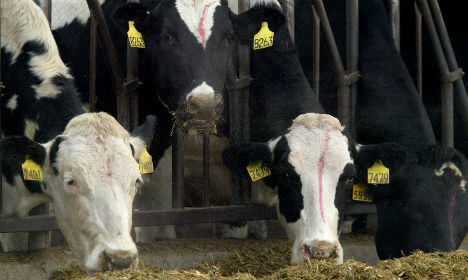 The ministry said the case of BSE had been detected in the northeastern region of the Ardennes, near the Belgian border.

“A suspected case of bovine spongiform encephalopathy (BSE), detected in a five-year-old cow which died prematurely at a cattle farm in Ardennes, was confirmed on March 23 by the European Union reference laboratory,” it said in a statement.

The announcement comes at a difficult time in France's key farming sector where the beef, pork and milk sectors have seen prices collapse due to falling sales to China and especially a Russian embargo on most Western food imports in retaliation for sanctions over the Ukraine crisis.

The crunch in French agriculture has been compounded by a price war with wholesalers and sparked months of angry protests.

The agriculture ministry said that the Ardennes BSE case had been reported to the European Commission and the Paris-based veterinary watchdog, the World Organisation for Animal Health (OIE).

It also sought to reassure consumers. “The detection of this case has no impact for the consumer,” it said.

About 100 cattle will be slaughtered within a month, as per the rules in such cases, following the discovery of the BSE case, the ministry said.

The affected cows would be those aged one year older or younger than the infected cow that died and which may have been exposed to the same feeding source, the ministry told AFP.

“That makes about 100 cattle” out of the 400 cows of the same breed at the Ardennes farm, for which the breeder will be compensated, it said.

The ministry also sought to reassure consumers. “The detection of this case has no impact for the consumer,” it said.

BSE is a brain-destroying disease among cattle that sparked a scare in the 1990s when it was found it could also be transmitted to humans who ate beef infected with the agent, a rogue protein called a prion.

The epidemic — of which Britain was the epicentre — was traced to the use of infected carcasses recycled for animal feed, prompting dozens of countries to strengthen veterinary controls.

The number of cases has plummeted, although isolated occurrences persist, according to a tally by the OIE.

In 2015, there were single cases in Canada, Ireland, Norway and Slovenia, as well as two cases in Britain, the OIE said on its website Thursday.

At the height of the disease, at least 27 people were killed in France.