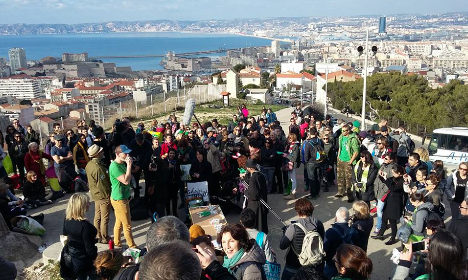 Eddie Platt, from Leeds has clearly had enough of the litter strewn streets of Marseille and he's decided to clean them up, one piece of litter a time.

And the English teacher encouraging his fellow inhabitants to do the same.

“I don't want to hear any more excuses like 'oh I pay my taxes'… people need to start taking responsibility of their streets,” Platt told The Local

His idea is simple: Pick up one piece of trash and take a selfie with it and then post it on the campaign's Twitter or Facebook page.

Since he launched the initiative six months ago, Platt's “1 Déchet par Jour/ 1 Piece of Rubbish” campaign has amassed some 5,000 followers on social media, and the selfies are pouring in – from Buenos Aires to New York. In all, Platt estimates his campaign has helped inspire people to pick up some 10,000 tons of litter around the world. Although he got the idea after posting a selfie of him picking up rubbish in his native Leeds, Platt decided in January that it was time for Marseille to get a proper clean-up treatment and called on locals to help him out in a group action. Around 350 Marseille inhabitants took part and cleared the port city’s Bonne Mère hill. A few weeks later, he did the same with the city’s Vieux-Port.

“The idea really came to me 38 years ago when my mother told me not throw litter,” Platt said.

“It's not about shaming anyone, it's just about encouraging them to pick up one piece of litter. They should start in front of their own house,” said.

“I challenge every British person in France to pick up one piece of litter and post a picture on the website,” he said.

While Platt’s friend Georges-Edouard Legrè has helped the Englishman set up his social media accounts, the young artistic director Romain Jouanaud has helped him out by designing a logo for the campaign. Platt says he ended up in Marseille by chance. Hitchiking his way toward Naples in Italy, where a teaching job was waiting for him, Platt said it was love at first sight when he made a short stop in Marseille. And since then he has made it his home.

“I was meant to stay for four days, but I passed the beach, it was beautiful and sunny and there were about 40 girls doing some kind of acrobatics and I thought 'I need more than four days here,” he said.

Platt and his friends are now on looking for sponsors to finance more clean-up campaigns.

He is not the only example of course of foreigners in France taking it upon themselves to clean up the streets.

Earlier this month The Local reported how Japanese tour operators were cleaning up certain parts of Paris to make them slightly more acceptable and welcoming to their clients.