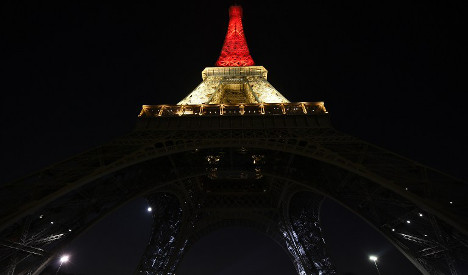 The Eiffel Tower was lit up Tuesday evening with Belgium's national colours in solidarity with the victims of the Brussels attacks.

The iconic symbol of Paris was bathed in black, yellow and red lights as dusk fell to honour the victims,  with the toll put at around 35.

“Paris and Brussels are united. The Eiffel Tower has been lit up in the Belgian colours,” Paris mayor Anne Hidalgo wrote on Twitter. She will head to Brussels on Wednesday “to express the solidarity of Parisians with the people of Brussels,” her office said in a separate statement.

“Once more it is basic values that are attacked: freedom, humanism, tolerance and unshakeable commitment to democracy.”

Hidalgo was also present at a silent vigil outside the City Hall in Paris, where hundreds gathered to pay the respects and show solidarity.

The court house in the central city of Lyon was also lit up in the colours of the Belgian flag (see below).