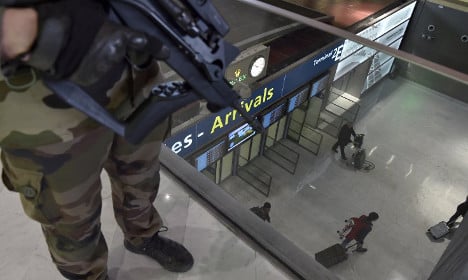 The response from the French government was rapid.

Within hours of bombs ripping through the departure area of Zeventem international airport in Brussels and Maelbeek metro station interior minister Bernard Cazeneuve laid out the latest French response to prevent similar attacks in France.

A further 1,600 police and gendarmes to be mobilised, including 400 in the Ile-de-France region around Paris.

The extra reinforcements will be used to boost security at France’s borders as well as air, sea and rail transport hubs, like Charles de Gaulle airport and Gare du Nord rail station. Soldiers will also be used to reinforce police patrols.

Cazeneuve also said access to public areas of transport hubs will be restricted to those with tickets or valid ID and checks and searches of passengers “will also become systematic”. But on Wednesday the day after the Brussels bombings, apart from the increased police presence, it appeared to be business as usual at Gare du Nord station and Charles de Gaulle airport in Paris.

The Local’s Louise Nordstrom said groups of police could be seen standing together at the transport hubs, but there was no sign of passengers being searched or asked for tickets or ID before entering.

At the Charles de Gaulle airport, Marjorie, a 68-year-old retiree from Burgundy who was travelling to Bristol, said she was surprised to find that there weren't more checks when entering the airport.

“You just walk in with your bag and there's nobody stopping you or anything. I thought there would at least be people by the doors to check you,” she told The Local.

Even if the new measures were in place will they really make it safer for people travelling around France?

The challenge of stopping an attack is greater when the perpetrators target unsecured areas such as departure or check-in areas, he said.

'Terrorists will simply choose their target'

Even if it may not reduce the risk, reacting to a terror attack by boosting security is still the common tactic of governments.

Following the foiled gun attack on a Thalys train from Amsterdam to Paris in August the French government decided to install metal detector “portiques” at the entrance to the platforms in Gare du Nord.

However expert at the time dismissed the expensive move as worthless and pure “security theatre”. “The terrorists will say ok, if you are going to control security on the trains, then we will just target the Metro or the buses. They can make their choice of target. I’m afraid it will still happen,” French terror expert Francois-Bernard Huyge told The Local.

Yet Huyge accepts the French government’s hands are effectively tied.

“Security is based on the principle of precaution. If you are an official or company chief you can’t take the risk of something happening because if it does, you will be crucified,” said Huyge. “We know it’s useless, but they are still going to do it.”

Interior Minister Cazeneuve himself accepted there were insurmountable logistical problems when it came to securing transport hubs.

“If you set up checks at the entrance to airports you going to clog up the airports, you are going to make it impossible for the economy to work,” Cazeneuve said.

“If you create queues in front of airports, you also create targets for terrorists,” he added.

'More security will make them reflect'

However terror experts and French lawmakers insisted there were benefits to the security measures when it came to stopping an attack.

“If we increase the difficulty for the terrorist to commit the act then firstly it causes him to reflect on what he’s doing,” security expert Jean-Claude Allard, head of research at the IRIS think tank told The Local.

“It’s just like preventing burglars from entering a house. The extra security makes them hesitate and if they hesitate, they may have to come up with a new plan and do more research and this might lead them into the hands of intelligence services,” said Allard.

French MP Gilles Savary, proponent of a new transport security law passed by parliament this month, which pushed for more random controls and searched of passengers, said the aim was to “tighten the net as far as possible” but accepted that “someone can always get through”.

“If Zaventem was an inaccessible bunker they would have hit a market in Brussels. So we have a choice between 'bunkerization' and daily life, and between the two there is a risk,” he told AFP.

'Public could hold the key'

Passengers travelling through Gare du Nord and Charles de Gaulle airports on Wednesday were well aware of that risk, but supported the increased police presence.

One Eurostar traveller at Gare du Nord, who asked not to be named, told The Local that although the attacks wouldn't prevent her from using public transport, she said she feels increasingly worried about the potential risks in doing so.

And another passenger about to take a flight from Charles de Gaulle airport said: “I think it's been shown that they can prevent attacks. I do believe they prevent a lot of things that they never tell us about.”

Ironically it may be the public themselves who are the greatest weapon in preventing terror attacks, hence why the government has repeatedly asked them to be on the guard and report anything suspicious.

“The biggest danger is to lower our guard,” French senator Francois Bonhomme, who wrote a recent report on transport security told Liberation newspaper.

“From this point of view, the attention and cooperation of citizens is essential.”