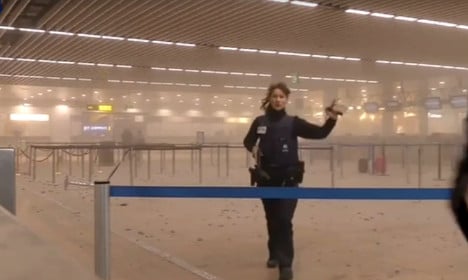 Video footage is beginning to emerge of the aftermath of Tuesday's bombings in the Belgian capital.

The video below shows the immediate aftermath of a bomb blast at the departure lounge of Zaventem airport just after 8am.

Travellers can be seen picking themselves up off the floor and fleeing through the smoke filled departure lounge.

Cries can be heard, as well as the voices of members of survivors trying to reassure each other.

Brussels aftermath video shows survivors huddled together, telling one another: “It's okay”.https://t.co/3Y7lEXrrjPhttps://t.co/KdqFXR9Wft

Hundreds of people evacuated onto the tarmac at #Brusselsairport following two explosions this morning https://t.co/rp3G5AuABI

Videos also emerged showing the aftermath of the attack on the metro train at the central Maelbeek metro station.
Passengers are sen having to get out of the wreckage of a metro train in the dark.