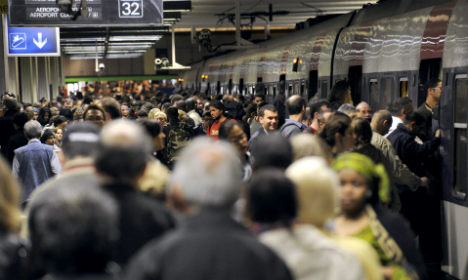 The strike will start late on March 30 and last until the morning of April 1. Photo: Bertrand Guay/ AFP file picture

The strike, called separately by the CGT and Unsa unions, is expected to hit Parisian public transport from 10pm on March 30 until 6.40am on April 1.

RATP is responsible for most of the public transport in both Paris and its surrounding Île-de-France region, including metro, trams, buses and parts of the RER commuter train network.

It remains to be seen how much of an impact the strike will have on the city's transport network. A forecast of how many trains will run is normally released on the eve of the industrial action.

Both unions are rebelling against RATP’s refusal to agree to a general pay increase for its staff for a second consecutive year. The CGT said the decision “was particularly unacceptable given the historical financial results” of the RATP.

According to RATP, however, a general increase isn’t needed as the staff salary will increase by an average of 2 percent this year anyway thanks to individual and categorical pay increases.

In addition to the conflict about salaries, the CGT is also staging the strike to protest the government’s controversial labour reform bill which it says “continues to diminish workers’ rights”, despite recent changes having been made to it.

After having stirred up much emotion among French workers, the government last week presented a watered-down version of the divisive proposal, including scrapping a clause that would  limit the amount of compensation a worker could claim if he or she had been sacked unfairly.

Also among the changes, small and medium-sized companies will not be able to unilaterally introduce flexible work practices into their working week.

In another slight modification to appeal more to the country’s  unions, judges will be allowed to investigate whether multi-nationals are faking “financial difficulties” of the French subsidiaries just to be able to lay off workers. If they are, then the lay-offs will be re-classed as “unfair dismissals”.

The reform, named after Labour Minister Myriam El Khomri, has deeply divided the Socialist government, pitting President François Hollande and Valls against a range of left-wing forces ahead of next year’s presidential election.