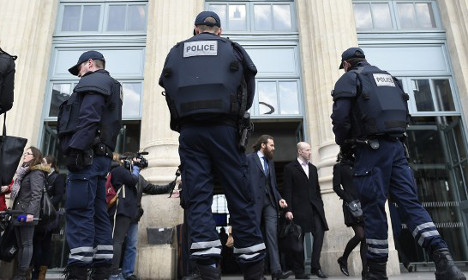 France moved to boost security in the light of the terror attacks in Brussels, immediately tightening border controls and deploying 1,600 extra police officers to transport hubs and restricting access to public areas of train stations and airports.

That includes 400 extra police and gendarmes in the Ile-de-France region around Paris. Most of those will help provide extra security at airports, rail stations and on the Metro.

These measures were on top of the thousands of extra police, soldiers and security guards deployed in the aftermath of the 2015 attacks.

Speaking after the meeting Interior Minister Cazeneuve said that various measures will be taken to boost security at transport hubs in the country, but denied initial reports that the border between France and Belgium had been closed altogether. Cazeneuve said the 1,600 extra police would be deployed to back up existing security at transport hubs around the country and in particular in Paris.

The minister also said public areas of train stations and airports will be closed to anyone without a ticket or appropriate identification.

He said messages calling on the public to be vigilant will be broadcast on the public transport network and military patrols that have been out on the streets protecting sensitive sites since last January's Charlie Hebdo attack will be moved to provide back up to police at train stations, airports and Metro stations.

Checks and searches on individuals will become systematic, he said.

Cazeneuve also called on Europe to “further boost coordination and the fight” against terrorism and the trafficking of arms.

The minister said that France's borders will continue to be policed by thousands of officers and reminded the public that French authorities have already prevented 10,000 people from entering the country since the November attacks in Paris that claimed 130 lives.

He also spoke of the need to maintain high security during the Euro 2016 football tournament that kicks of f in France in June.

Cazeneuve said that everything will be put in place during the tournament to ensure “collective security.” French terrorism expert François-Bernard Huyghe told The Local on Tuesday: “The groups that carried out the Paris attacks were extremely organised and had many links. We shouldn't be surprised if there are other groups preparing further attacks.”

“We may just have to get used to this.”

“Controls have been reinforced. Delays are expected. Thank you for understanding.”

A full deployment of security officials was underway at all eight terminals of Paris Charles de Gaulle  airport and its two railway stations, with reinforced checks on trains arriving from Brussels, an airport source told AFP.

There was also a security alert at Gare du Nord train station, which serves the Charles de Gaulle airport, and police were seen sealing off the station. A bomb squad was sent in, but the alert proved to be a false alarm and the cordon was later lifted.

Additional patrols were also dispatched to Orly airport in southern Paris and the southern city of Toulouse.

The security measures follow suicide bomb attacks at Brussels Zaventem airport on Tuesday morning, and another blast at the central Maelbeek metro station in the Belgium capital, which is located near EU institutions.

According to authorities at least 31 people were killed and over 200 injured in the explosions.

The Brussels blasts come just days after the arrest of Salah Abdeslam – the chief suspect wanted over the November attacks in Paris.

Since his arrest there had been fears that jihadists may try to strike in Europe to send a message to authorities that they were still a force.

Security measures were also beefed up at London's Gatwick airport, at Frankfurt airport and airports in the Netherlands. Eurostar said it had suspended all trains to and from Brussels and Thalys, which operates fast-speed trains between Paris and Brussels, said its services connecting the two capitals had been cancelled.

France has been on high alert for terrorism since Paris was targeted in a string of terror attacks on November 13 which left 130 people dead. Paris was also struck by terror in January 2015 when 17 were killed at the offices of Charlie Hebdo magazine and a Jewish kosher store. A policewoman was also gunned down in the street.