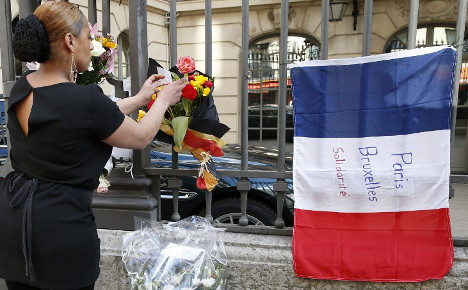 Paris had allowed itself to draw a sigh of relief this week.

Salah Abdeslam, the chief surviving suspect behind the November 13th attacks in the French capital and who had been on the run for four months, was finally behind bars much to the relief of authorities, victims, families of victims and the French public as a whole.

There was also the sight of La Belle Equipe, the only bar hit by the terrorists that had remained shut, finally reopening on Monday to much cheer and emotion from its regular customers.

The city's residents could be forgiven for thinking the worst was perhaps over.

But on Tuesday morning, just four months after the Paris terror attacks, Paris was given a clear reminder of how high and dangerous the terrorist threat remains. (Salah Abdeslam runs from police before his arrest on Friday. Photo: ITele.)

The bombings, claimed as expected by Isis, may have been 300km away in Brussels but they sent shudders around Europe, and nowhere more so than in Paris.

The almost triumphant reaction by the Belgian and French governments to Abdeslam’s arrest last Friday is now made to look even more inappropriate than it first did. And the brave staff at Le Belle Equipe and the other bars that have reopened since November will no doubt be feeling a little edgy once again. The fact that the Paris attacks were said to have been organised in Brussels, a city where many of the jihadists were from or grew up in – including Abdeslam – meant that France was already extremely concerned about the continued terror threat from just across the border.

Tuesday’s attacks, which show that Abdeslam was clearly not the last piece of the jigsaw and that more terror cells remain at large and are ready to strike, will only deepen the angst that France could be targeted once again.

The attacks in Brussels had the French Prime Minister Manuel Valls repeat that Europe is at war, as he did in the days and weeks after the Paris attacks.

“We are at war. Over the past few months in Europe we have endured several acts of war,” Valls said.

While the latest attacks may have taken in place in a foreign city, the government reminded the public that France was at the centre of the fight.

“France will implacably continue the fight against terrorism both on the international level and at home,” said President François Hollande.

“Through the attacks in Brussels, the whole of Europe has been hit,” he said.

French terrorist expert François-Bernard Huyghe told The Local that: “We may simply have to get used to this. France and Europe may become like Israel where people live with the fear that their bus to work could be blown up.

“Many of the Belgian jihadists had French nationality. It’s possible Tuesday’s attack may have been about revenge for Abdeslam but it’s likely a planned attack that was simply brought forward because it’s very important for them to show people they can strike.

“And that they can strike where they want and when they want,” said Huyghe.

The investigation into the Paris attacks has revealed that the network of jihadists prepared to carry out attacks was far larger than first thought.

The woman who informed French police of the whereabouts of Paris attacks ringleader Abdelhamid Abaaoud told reporters he had boasted of travelling to Europe with 90 Isis fighters.

“The group who prepared the Paris attacks were clearly very organised and had many links, there may be other groups preparing more attacks,” said Huyghe.

That reality was not lost on the French government.

Not long after news of Tuesday’s bombings filtered through to Paris, an emergency government meeting was called after which the interior minister Bernard Cazeneuve announced a series of new security measures in a city where security had already been ramped up to the max. A further 1,600 police were to be deployed and the public were to be barred from transport hubs, unless they had a ticket or valid identification.

In a sign of how jittery Paris had quickly become, Gare du Nord, the city’s main train station, was evacuated twice on Tuesday over suspect packages.

The nervousness that was evident in the days after the massacre in November returned. You wouldn't be surprised if commuters in Paris opted not to take the Metro on their way home on Tuesday.

On Tuesday it was the turn of the city of Paris to show solidarity with its neighbouring capital, with Mayor Anne Hidalgo announcing that the Eiffel Tower would be lit up in the colours of the Belgian flag. A memorial gathering was also due to be held in front of the City Hall.

Hidalgo, her fellow Parisians and the French government will get little comfort from the fact that this time Isis’s henchmen set off their bombs 300 km away.

They know it was a lot closer to home than that.