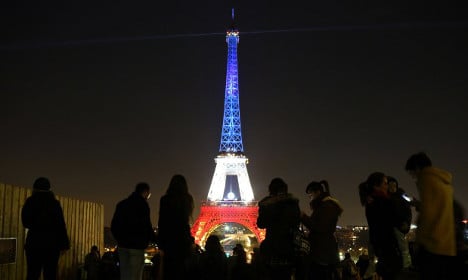 This time it will be the colours of Belgium that adorn the Eiffel Tower. Photo: AFP

The symbol of Paris will be bathed in black, yellow and red light in homage to “the victims, their loved ones and all the people of Belgium,” she said in a statement following the attacks that killed at least 31 (revised down from an earlier toll of 34).

“Today Europe is targeted at her heart,” Hidalgo said. “Once more it is basic values that are attacked: freedom, humanism, tolerance and unshakeable commitment to democracy.”

She expressed her “full solidarity and that of Parisians,” the statement said, adding that the mayor spoke to Brussels counterpart Yvan Mayeur to “tell him how much we share their sadness and grief.”

Hidalgo also encouraged Parisians to join her for a silent gathering of solidarity in front of the town hall at 7pm on Tuesday evening.

When Paris struck by the devastating terror attack on November 13, which left a total of 130 people dead, the Eiffel Tower was lit up in the blue, white and red colours of the French tricolor.

Expressions of solidarity between France and Belgium also poured in via social networks like Twitter, with one cartoon in particular – created by Le Monde's cartoonist Plantu – being shared, retweeted and liked thousands of times.