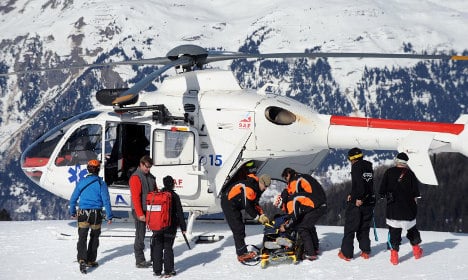 The circumstances of the incident, which occurred in an off-piste area above the ski resort of La Plagne 200 kilometers (125 miles) east of Lyon, were not immediately clear.

It is just the latest tragedy during a winter season in the French Alps that has been marred by a number of deaths from avalanches and accidents, including those of several Brits.

A British woman also lost her life at La Plagne resort when she lost control descending a blue ski slope.

Earlier this month a man died on the piste at Flaine after crashing into a fellow skier.

In January two French teenagers and a Ukrainian man were killed when an avalanche swept away skiers including a group of students at the Deux Alpes resort.

Days later six French Foreign Legionnaires were killed during a training exercise near the resort of Valfrejus.

A young man was also killed when he and some friends used a safety mattress to sledge down a slope while drunk at Les Deux Alpes resort.

They lost control of the makeshift sledge and it crashed into trees.