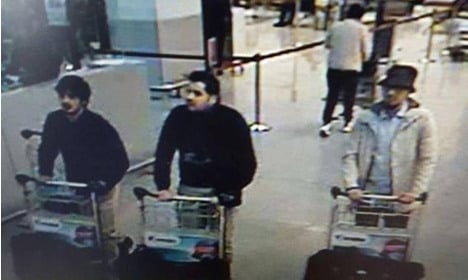 Police have released an image of three suspects filmed by surveillance cameras at Brussels airport.

The Belgian capital Brussels was hit by a series of deadly terrorist attacks on Tuesday morning, just over four months since the devastating assault on Paris by jihadists.

On Tuesday afternoon, police released an image of three suspects who were caught on tape by surveillance cameras at Brussels Zeventum international airport prior to the attacks.

The airport was hit by two explosions shortly after 8am, then at around 9.20am there were reports of explosions at at least one Metro station in the city.

At least 31 people  (revised down from the earlier death toll of 34) were killed in the blasts according to the latest reports and over 100 more left injured. Later on Tuesday the terror group Isis claimed responsibility for the deadly bombings. Brussels transport authorities confirmed that at least 20 people died in the blast at Maelbeek Metro station and over 100 injured.

At least 10 were killed in the airport blasts, with over 80 injured.

A third unexploded bomb was later found at the airport in Brussels.

Brussels aftermath video shows survivors huddled together, telling one another: “It's okay”.https://t.co/3Y7lEXrrjPhttps://t.co/KdqFXR9Wft

The Belgian prosecutor later confirmed that the airport explosions were suicide bombings, confirming the fears that the capital had been targeted by terrorists.

There were unconfirmed reports of a Kalashnikov being found at the departure lounge at Zeventem airport. Some witnesses had talked of a shooting before the explosion at the airport.

The blasts come just days after the arrest in the city of Salah Absdeslam – the chief suspect from the Paris terror attacks who had been on the run for four months.

Witnesses spoke of panic in the streets as survivors stumbled out of Maelbeek Metro station covered in blood and suffering burns. The city quickly went into lockdown, with the airport  – an international hub serving countries around the world- immediately closing until at least 6am Wednesday and the city's Metro system was evacuated.

The city's museums were also closed and the public transport system suspended. Universities were also evacuated.

There were reports of raids taking place at addresses across the city as Belgian police began the quest to identify the attackers.

Authorities in Paris immediately upped security at the city's airports and reinforced checks. There was also an alert at Gare du Nord station in Paris, where trains depart to Brussels and London. The bomb squad was sent in but it proved to be a false alarm.

Just arrived at Schuman station after walking on the tracks. pic.twitter.com/4xc0YCQmIv

Belgium authorities have implemented their emergency response plan and the terror alert has been raised to its maximum level.

Images and videos showed smoke rising above the airport while passengers fled in panic. Other images showed injured passengers lying on the ground, some covered in blood, with their clothes having been ripped off in the explosion.

One witness to the blasts in the airport named David Crunelle told L'Express newspaper: “I heard two distinct explosions about three seconds apart. They occurred near the international check-in desks for flights to the United States.

“After the explosion, everything became dark. There was a lot of smoke but no flames. There was no movement of panic but people began to get out of the airport straight away.

“I saw at least six people severely injured, including children. There are a lot of people lightly injured, covered in blood. Many are crying,” he said.

Bomb explosion at Brussel airport. Apparent terrorist activity. Airport is on lockdown and being evacuated. pic.twitter.com/nPRbdzFQdO

Smoke of #Brussels airport terminal after what sounded like two explosions just before 8 AM pic.twitter.com/d7e8mGBp1M

A witness at the airport told Sky News that he had been waiting at Gate B for a flight to Dublin when airport staff suddenly told passengers that the area was being evacuated because there had been a bomb.

“Officials told everyone to get out of the gate,” he said. “There were 100-150 people scrambling to the back.”

“Everyone here in my gate were quite scared and a lot of people were crying. A lot of them seemed quite confused about what was going on.”

Brussels has been the focus of the investigation into the Paris attacks ever since it emerged that many of the attackers were from, or grew up in the Belgium capital.

According to unconfirmed reports Belgian intelligence services were alerted on Monday of the possibility of an imminent attack.

Belgium has charged a number of suspects, including Abdeslam, in relation to the November attacks that left 130 dead in Paris.

Authorities in Belgium raised their own terror alert after the November attacks and fear of more terror attacks increased after Abdeslam's arrest on Friday.

One Belgian minister claimed that the suspect had been planning to attack the Belgium capital with another terror cell.

Investigators say that the terror network that helped organise and carry out the Paris attacks was far larger than they first realized and have been concerned that jihadists were preparing more attacks.

Paris Mayor Anne Hidalgo sent her condolences and solidarity to the people of Brussels and said the Eiffel Tower will be lit up in the colours of the Belgium flag as a mark of respect for the victims.