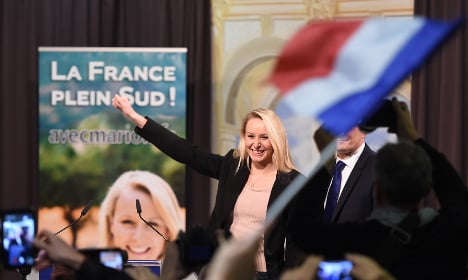 “If National Front measures had been in place at the time of the attacks on November 13, we probably wouldn’t have had a November 13,” Marion Maréchal Le Pen, the niece of the anti-immigration party’s leader Marine Le Pen, told French broadcaster BFM TV in an interview late on Sunday.

According to the 26-year-old MP, France’s migration policies are wholly to blame for the attacks.

“Three of the terrorists who attacked had taken the migrant route,” she said, noting that her party would not have allowed such an influx of migrants into France in the first place.

“Marion Maréchal-Le Pen’s comments on the November 13 [attacks] are stupid,” she tweeted, later also questioning why French media would allow such an “anti-republican” to speak for two hours on air.

Maréchal-Le Pen, viewed as the ideological heir of her bellicose grandfather and the party’s founder Jean-Marie Le Pen, is known for her controversial comments, often forcing the party’s current leader, Marine Le Pen, to either distance herself from her hardline Roman Catholic niece or try to smooth things over.

Last week, Maréchal-Le Pen triggered a storm of criticism after she said that gay marriage would “open the way” to polygamy.

“The traditional and natural family are among the values we defend,” she said.

The comments forced Marine Le Pen to, once again diplomatically intervene, saying “we are very, very far” from “recognising polygamy” in France.

Among some of her previous controversial comments, Maréchal-Le Pen has suggested Muslims could only be French “if they follow customs and a lifestyle that has been shaped by Greek and Roman influence and 16 centuries of Christianity.”

“We are not a land of Islam,” she said during a campaign speech in Toulon in November. “In our country, we don't wear djellaba clothing, we don't wear a veil and we don't impose cathedral-sized mosques.”