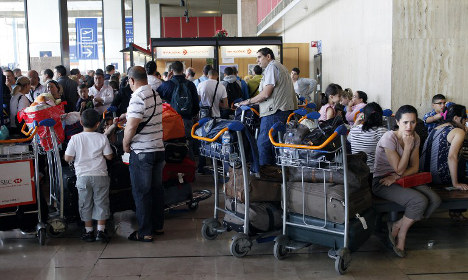 On Monday morning reports from France stated that the number of flights cancelled was worse than initially expected.

Initially aviation authorities had instructed airlines to cancel around 20 percent of flights at these airports.

At Lyon, Nice, Beauvais and Nantes airports the percentage of flights that airlines had to scrap rose to 20 percent, much higher than on Sunday.

Flights that had to fly over French space also faced delays and although Paris Charles de Gaulle airport was spared the worst of the strike, there were reported delays.

There were reports that some airlines were putting passengers on coaches and sending them off to their destination by road. EasyJet said it had cancelled 90 flights and that more disruptions were possible, while Ryanair said a number of flights had been grounded.

Anyone travelling in or out of France on Monday is advised to check directly with their airlines whether their flight has been disrupted, before travelling to airports.

The link in the Ryanair tweet below contains information about the status of Ryanair flights while passengers can CLICK HERE for a link to the easyJet flight tracker.

1/2 Due to a French ATC strike, we regret a number of flights are cancelled (Monday 21 March) Further info here: https://t.co/zV75hOu700

For their part Air France says long haul flights will be guaranteed as will the airline's flights in and out of Paris Charles de Gaulle airport.

Monday’s disruptions follow on from the first day of industrial action on Sunday, which saw hundreds of flights delayed or cancelled.

A huge number of flights between the UK and France were hit by the strike.

A spokesman for easyJet confirmed that 82 flights were cancelled on Sunday as a result of the strikes, including 32 scheduled to take off or land at British airports

Air traffic controllers are unhappy about the lack of resources and complain the technology they use is outdated.

They also raised the alarm bells about the outdated technology available to them that frequently breaks down and has a direct impact on security.

A French air traffic controller told The Local they weer surprised about the impact of the strike given that it had only been called by a minority union.

“It appears that many other controllers have joined the strike, because they agree with the motives. We do a good job and yet they can't even provide us with an up to date system to do it,” said the Paris-based controller, who asked not to be named.

They call upon France’s aviation authorities at the DGAC to make the necessary investments, “that they can no longer put off”.

But airlines are fed up with the number of strikes held by French air traffic controllers and want action taken to prevent them being able to cause constant travel chaos.

Ryanair are leading the fight and are once again calling on passengers to sign a petition to help bring an end to the strikes.

Ryanair’s chief marketing officer, Kenny Jacobs, said previously: “It’s unacceptable that Europe’s consumers repeatedly have their holiday and travel plans disrupted or cancelled by the selfish actions of ATC unions every summer, who use strikes as a first weapon rather than a last resort.

“If the EU won’t listen to the airlines, perhaps they’ll listen to Europe’s citizens.”