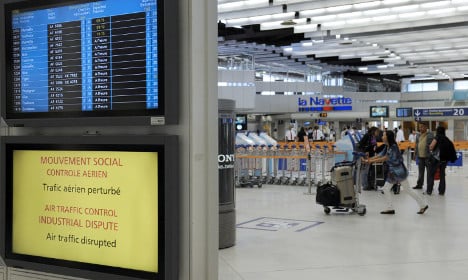 Hundreds of flights were once again grounded across Europe on Monday as French air traffic controllers continued their latest two day strike.

The industrial action, according to Ryanair at least, is the 42st day lost to strikes by French air traffic controllers since 2009. THe budget airline opened a new war of words with French unions on Monday, blasting them as “selfish”.

While passengers and airlines were once again left in a pickle, with their travel plans ruined, the controllers themselves tried to justify the industrial action by claiming they have the interests of passengers at heart.

The union leading the strike UNSA-ICNA, which represents 20 percent of French controllers, says that while their actions may leave them cheesed off in the short term, their industrial action is aimed at improving their safety in the long term.

Their main beef is with a fall in the number of staff that is placing ever greater pressure on the controllers at a time when the amount of air traffic continues to rise and aviation security is a major concern. They claim the rate of replacement of staff who leave, normally through retirement, has dropped from 80 % to 65 % which goes against the current demands of the industry.

One air traffic controller who The Local spoke to, summed up the issue around the threat to safety.
“The problem is it can only take five to ten minutes for air traffic control to quickly become overwhelmed and we can’t just tell pilots ‘come back in five minutes, I’m busy,” said the Paris-based controller who asked not to be named.
“If we had an up to date system then perhaps you could justify the drop in staff numbers. But we do a good job and they can't even be bothered to put a decent system in place, like most countries in the rest of Europe have.
“You can't reduce staff numbers while the technology remains backward,” he added.
The controller said colleagues were also upset about them being subject to increasing tests on their ability to do the job.
The union ICNA points out that these cuts are taking place despite the fact the airline industry is in rude financial health and that airlines are making healthy profits, which are only going to grow in the future.

“We can now really feel the lack of investment over recent years,” the union says.

“The current system dates from another age and leads to frequent blackouts with a direct impact on aviation security,” the union says.

The say controllers have to deal with radar screens blacking out, faulty collision warning systems and flight path calculators from the 1980s.

They demand the necessary financial investment that would give them the necessary up to date technology to allow them to meet the demands on them that are increasing year by year. (Ryanair CEO Michael O'Leary, who has had enough of French strikes. AFP)

But while their concerns might alarm many passengers, who will be shocked to hear of the possible consequences to safety, airlines like Ryanair are simply sick of the “unwarranted” strikes.

The airline's Robin Kiely said on Monday: “It's grossly unfair that thousands of ordinary European consumers have their travel and holiday plans disrupted by the actions of a selfish few.”

Ryanair wants the public to join their campaign: “Keep Europe’s Skies Open“, which was launched last year. With enough support they claim they can force Europe to take action against the French.

“Keep Europe’s Skies Open is a petition established by Ryanair to prevent passengers flights and holidays being delayed or cancelled when Air Traffic Control (ATC) unions in France go on strike, “ reads the campaign.

“Ryanair calls on the European Commission to take action to prevent flight disruptions caused by ATC strikes. When Ryanair obtains 1m petition signatures, we will present this petition in Brussels to urge the EU Commission and the EU Parliament and they then have to consider taking action to prevent this.”

Who do you agree with?