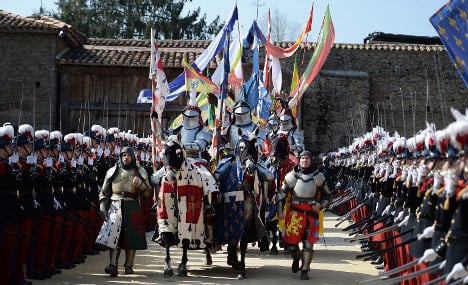 Just as the historic gold-plated ring was safely back in French hands it’s emerged that British authorities want it back.

The saga of Joan of Arc’s ring took a new twist on Sunday just as it was officially unveiled on its return to France.

The ring thought to belong toFrance's most famous historical martyr, Joan of Arc, was unveiled on Sunday at the Puy de Fou historical theme park in the western Vendee region.

“It's a little bit of France that has returned. The ring has come back to France and will stay here,” said Philippe de Villiers, the founder of Puy de Fou told the crowd. The ring had thought to have been in Britain for over six centuries and de Villiers told spectators that there was “a new twist” in the story of the ring.

“The British government has sent our lawyer an unprecedented demand: the return of the ring to London,” de Villers told the shocked crowd.

“We are told that the National Arts Council considers this ring part of those objects with, and I quote ‘high national symbolic value’ and as such should have part of a special legislation.”

According to the demand, on purchasing the ring the Puy de Fou park should have obtained a special export license necessary under European regulations.

De Villiers said that they had checked the rules and claimed they only apply if the object is taken out of the European Union.

He then mocked the British and the potential of a Brexit fro the EU by telling the crowd: “It is not at all our intention to have a Puy de Fou exit.

He then sent a defiant message to the British government.

“Ladies and gentlemen from Britain, if you want to see the ring, then come to the Puy de Fou. For the rest it’s too late,” he said.

Joan of Arc, who fought against the English occupation of France during the Hundred Years' War, was burned alive at the stake but became a symbol of French resistance and was later made a saint by the Catholic Church. Sunday's official unveiling saw the ring carried on a cushion in a wooden ark, with its own honour guard and a military procession.

The gold-plated silver ring was dated to the 15th century by an Oxford laboratory, but the trove of historical documents that came with it have yet to prove it belonged to the famous French martyr.

“They are only at the start of the exploration. It's a lot of work but a beautiful adventure,” said expert Vanessa Soupault, who saw the ring recently.

That fits a description recorded at Joan of Arc's trial in 1431, where she told the court the ring had been given by her parents.

Puy du Fou says the ring was probably enlarged and modified at some point in the last 200 years.

However the difficulty of tracing the ring's path through the centuries has left many historians sceptical.

Part of the problem is the number of copies in circulation. There was even a tombola in the early 20th century in which prizes included versions of the ring.

“Around Joan of Arc, we already have several cases of false objects,” said Olivier Bouzy, head of the Joan of Arc archives in the north-central French town of Orleans