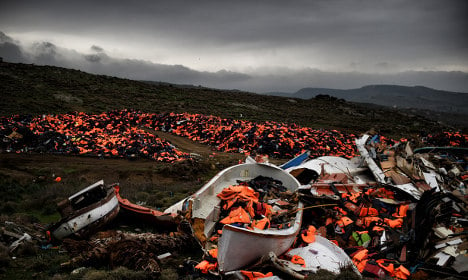 Wrecked boats and thousands of life jackets used by refugees and migrants during their journey across the Aegean sea lie in a dump in Mithimna in Greece. Photo: AFP

“The Turkey deal was approved,” Sipila wrote on Twitter.

Czech Prime Minister Bohuslav Sobotka confirmed that the expulsion of migrants arriving on the Greek islands would begin on Sunday.

“Deal with Turkey approved. All illegal migrants who reach Greece from Turkey as of March 20 will be returned!” Sobotka wrote on Twitter.

More than 1.2 million migrants have come to Europe since January 2015 in the continent's biggest migration crisis since World War II, and around 4,000 have drowned while trying to cross the Aegean Sea between Turkey and Greece.

But the deal comes at a heavy cost for Europe, with many members of the bloc expressing misgivings about the legality of the deal and Turkey's human rights record.

Turkey has demanded an acceleration of its long-stalled bid for EU membership, the doubling of refugee aid to €6bn ($6.8 billion) and visa-free travel in return for taking back all new irregular migrants coming to Greece, the main entry point to Europe.

Davutoglu is now set to formally sign off on the accord at a final meeting with EU leaders.

“Tusk's proposal for the EU-Turkey agreement approved by EU leaders, in principle, as it is now up for final talks with the Turkish prime minister,” a senior EU official told AFP.

But in a sign of the tensions that remain between Ankara and Brussels, President Recep Tayyip Erdogan blasted several EU states for taking only a “handful of refugees” in contrast to the nearly three million Turkey has admitted, most of them fleeing the Syrian war.

Erdogan also accused the Europeans of supporting the outlawed Kurdistan Workers' Party (PKK) days after a bombing in Ankara claimed by Kurdish rebels allegedly linked to the group.

“European countries are paying no attention, as if they are dancing in a minefield,” he said.

Critics have said the mass expulsion planned under the EU-Turkey deal could infringe international law on the treatment of asylum seekers.

Under the terms of the plan, the EU would take in one Syrian refugee from Turkish soil in exchange for every Syrian readmitted to Turkey from Greece.

The move is meant to discourage them from risking their lives in often rickety and overcrowded boats operated by smugglers.

EU officials insisted the deal would be stressed repeatedly each application would be treated individually, with full rights of appeal and proper oversight.

EU sources said last-minute sticking points were cleared up over the deal's legality, Turkey's membership bid, the date for launching the agreement and a plan to double the amount of aid to Turkey.

Another major hurdle that was overcome was opposition from Cyprus, rooted in long-standing tensions with Turkey over Ankara's refusal to recognise its government on the divided island.

Many European Union states have expressed concerns about Ankara's human rights record, including its treatment of the Kurds and a crackdown on critics of the government.

The United Nations and rights groups fear the deal could violate international law that forbids the mass deportation of refugees.

Amnesty International set up a sign outside the summit venue: “Don't trade refugees”.

The crisis has left Europe increasingly divided, with fears that its Schengen passport-free zone could collapse as states reintroduce border controls and concerns over the rise of populism and anti-immigrant sentiment.

The deal also envisages major aid for Greece, where tens of thousands of refugees are trapped in dire conditions after Balkan countries shut their borders to stop them heading north to richer Germany and Scandinavia.

The agreement does not however affect the more than 46,000 refugees and migrants already in Greece.

Greek Interior Minister Panagiotis Kouroublis described the overwhelmed border town of Idomeni where many of the migrants are camped out as a “modern-day Dachau”.

British Prime Minister David Cameron was also hosting a meeting with Merkel and several other EU leaders on how to tackle migration flows from lawless Libya, which appeared to be increasing again.