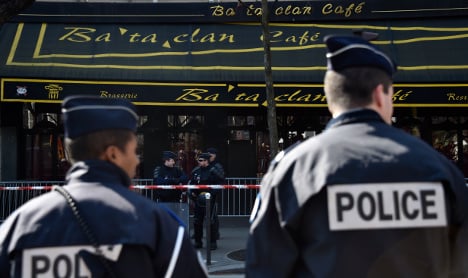 Police outside the Bataclan during the investigation. Photo: AFP

One survivor of the Bataclan massacre told of how a group 40 barricaded themselves in a tiny room for three hours, and were only saved from the gunmen thanks to the result of a vote, that was only won by a narrow majority.

As killers stormed the theatre, shooting at concert-goers indiscriminately, the group managed to shelter in the room, measuring just nine metres squared.

One of them, Caroline Langlade, gave the shocking testimony to the parliamentary commission, explaining how the group barricaded the door with a sofa and mini fridge.

“I turned off the lamp, closed the windows so that we couldn’t be seen…so that the terrorist couldn’t see how many of us there were by looking through the gap in the door, which half-opened with every blow he gave it,” Langlade recalled.

The men and women remained trapped in the dark for three hours.

However, the attacker changed his tactic, and after a long silence, he returned to the door, saying: “Open the door, it’s the GIGN [specialist French police units], I’ve come to rescue you.”

At this point, the terrified victims were divided as to whether to open the door. So Langlade initiated a quick show of hands.

After conducting a vote, they decided – by a narrow majority – to keep the door shut and remain inside.

It proved to be the right decision and eventually, the real police turned up, but they too had trouble convincing the survivors that they were genuine.

To ensure that this wasn't another trick, the victims called police and passed on a secret code for the officers outside the door to tell them.

They remained barricaded in the room for a further 15 minutes until they were convinced it was safe to leave.

The parliamentary commission, chaired by Georges Fenech, is investigating the attacks which saw 130 people killed, 90 of them at the Bataclan.

On Thursday they witnessed a reconstruction of the police raid on the Bataclan, that drew anger from families of those who were killed.