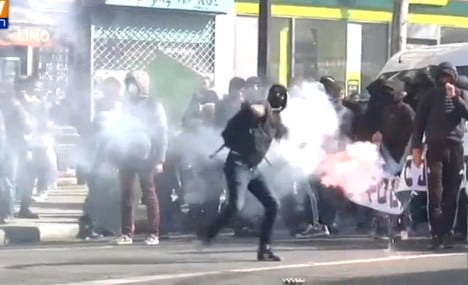 High schools and universities were blocked across France on Thursday as students protested for a second time against planned job reforms.

Despite the French government agreeing to water down the controversial reforms aimed at freeing up the labour market, student unions had called for an increase in mobilization. They demand the government scrap the bill altogether.

Around 115 lycée high schools were blocked, many with waste bins, and several university campuses were closed. But as students marched through the streets of Paris, Marseilles, Nantes and beyond, trouble flared.

Images sent out on Twitter showed banks and bus stops with their windows smashed. There were reports of three arrests in Paris and two policemen were left injured.

Some suggested troublemakers, intent on provoking a confrontation with police, had infiltrated the student protests.

The video below shows a group of protesters with their faces covered hurling missiles at riot police, who responded with tear gas.

In the city of Rennes, protesters descended on to the rails to block trains from arriving.

For their part, student union leaders condemned the violence.

Students had already protested earlier this month, a move which prompted the PM Manuel Valls to invite their union leaders to talks at his residency.

But his concessions failed to satisfy them and they called for students to step up their protests.

The reforms are aimed at making it easier for French firms, particularly small and medium sized companies to lay off staff. They are also intended to make working hours more flexible to suit the company needs.

But after around 200,000 people protested last week the PM agreed to offer concessions.

In a significant change from the original text, Valls said small and medium-sized companies would not be able to unilaterally introduce flexible work practices into their working week.

The new proposals also strengthen the role of judges in rulings over redundancies.

The government argues that it is trying to free up the job market and reduce unemployment, especially of young people.

But left-wing critics say it is another example of Hollande's government taking decisions more in tune with a right-wing agenda.

President Francois Hollande had acknowledged that the original text had required “corrections” and “explanations”, but had firmly ruled out withdrawing the entire proposal.