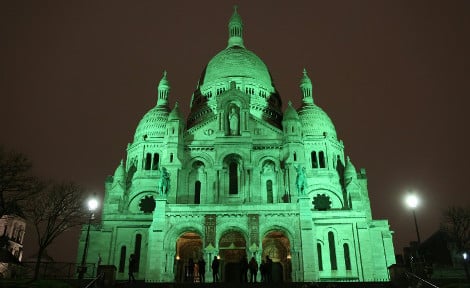 The Sacre Coeur as you've never seen it before. Photo: AFP

Happy Saint Patrick’s Day to all our Irish readers.

If you’re in Paris this evening then there’s no better time to head up to the Sacre Coeur in Montmartre and take a selfie in front of a green Basilica.

The monument that looks over Paris will be lit up in green as the French capital marks St Patrick’s Day.

Various other buildings including the Moulin Rouge, the big wheel in the Tuileries and the BVH building in the Marais quarter will also go green for the night. The French connection to Ireland is strong, with around 15,000 Irish people calling France home. Irish culture has had a mighty influence on the Parisian drinking scene, with a slew of Irish pubs strewn across the city.

If you’re in Paris then no doubt you’ll head to one of the capital’s many Irish bars (or perhaps you’ll avoid them like the plague) to get your annual chance to wear a Guinness hat.

There's so many to choose from but for a good atmosphere look no further than the Cork and Cavan of course, on Quai de Jemmapes along Canal St Martin. It's a good mix of expats and French locals, and the mostly Irish bar staff never fail to push the boat out to celebrate Paddy's Day. If you're lucky you might even get to see the pub's Irish owner sing a few Irish songs on stage before pouring a pint of Guinness over his head.

If you are looking for more of a raucous party atmosphere with discos and dancing, you're probably better off heading to one of the big chains like Corcoran's or O'Sullivans on the Grande Boulevard.

There are a few other Irish themed events in Paris you might want to check out.

These are courtesy of the site Guide Irlande: