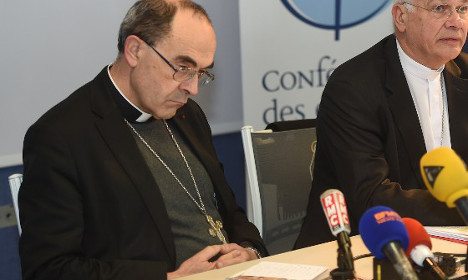 French cardinal accused of covering up the sexual abuse of children by a priest faced new accusations on Wednesday that
he had promoted another cleric despite the man having a previous conviction for sexually abusing adult students.

Le Parisien newspaper reported that Archbishop of Lyon Philippe Barbarin had allowed an unnamed priest to take up a job in his diocese in central France despite the man having been given a suspended 18-month jail sentence for sexually abusing students in a residential home that he supervised.

The episcopate denied the accusations, saying the man had not been promoted although it admitted he was still employed by the Lyon diocese.

The newspaper's allegations are likely to add to the pressure on Barbarin, who faced calls this week from Prime Minister Manuel Valls to “take responsibility” in the case of another priest, Bernard Preynat.

Preynat was charged in January after victims came forward with claims he had sexually abused Scouts between 1986 and 1991. Prosecutors say Preynat has admitted sexually abusing minors.

Barbarin, one of the most senior figures in the Catholic Church in France, on Tuesday denied he had hushed up Preynat's acts, which were committed years before he became archbishop of Lyon in 2002.

The new accusations in Le Parisien relate to the period between 2007 and 2009. The unnamed priest was sentenced by a court in the southwest town of Rodez. He was then moved to the Lyon diocese, where he worked his way back up the ladder before, according to Le Parisien, being promoted by Barbarin to dean in 2013, meaning he was in charge of several parishes.

When the newspaper asked a source close to Barbarin if the cardinal had been aware of the man's conviction, the source said: “He does not want to reply to that question.”

The spokesman for France's bishops, Olivier Ribadeau-Dumas, said the case had “nothing to do” with the sexual abuse of children and denied Barbarin had promoted the priest.

“He was not promoted. Today he has responsibilities for training in the Lyon diocese… but he has no contact with young people and the diocese has always been vigilant of this,” the spokesman said. “This is a case of priest who was sentenced to 18 months in prison suspended for inappropriate touching of adults. It is in no way paedophilia.”

He added: “This case has nothing to do with, and is in no way comparable to, that of Father Preynat.”