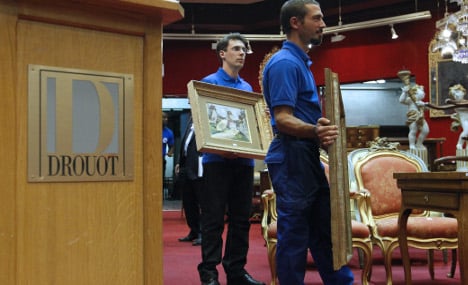 Around 40 “Col Rouge” (red collars), named after their uniforms, along with six auctioneers from the Hotel Drouot auction house are on trial for charges of gang-related theft, conspiracy to commit a crime or handling stolen goods.

The case against the employees was launched in 2009 after an anonymous tip alerted investigators to a Gustave Courbet painting that disappeared while being transported in 2003.

Investigators allege institutionalised theft by the porters — known as “Les Savoyards” as all members of the secretive group came from the Alpine region of Savoie.

Raids uncovered a mountain of treasures, including precious jewels and antique furniture, that went missing — and the lavish lifestyle of the porters. One apparently drove a Porsche 911 and the latest BMW cabriolet, while another allegedly bought a Paris bar with the fruits if his spoils.

The porters are accused of pilfering objects sent by the auction house to clear the homes of wealthy people after their deaths, taking items that weren't listed in the inventory. Some items were apparently then sold at
auction.

According to the prosecution, the practice — known as “la yape” which means “theft” in Savoie slang — was endemic and profits were shared among the group.

The “Col Rouge”, who wear black uniforms with red collars, have monopolised the transport and handling of valuables for the Hotel Drouot auction house since 1860.

Membership of the union is tightly controlled and limited to 110.

Each new member was apparently brought into the fold by an existing member, and according to some testimonies the initiation process involved stealing something and sharing the proceeds with fellow insiders.

Some of the porters allegedly defended the practice saying they were “stealing from the dead”.

Several dozen victims of the alleged scam are seeking damages in the trial, including the Hotel Drouot, which no longer uses the porters' services.

“These thefts committed on such a large scale have shamed the institution,” the auction house's lawyer Karim Beylouni said.

The trial continues until April 4.