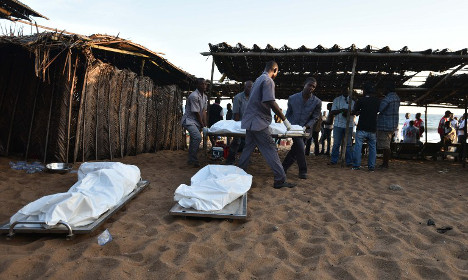 Bodies lie on the beach after the attack that left four people dead. Photo: AFP

When gunmen from Al-Qaeda in the Islamic Maghreb killed 18 people at a beach resort in Ivory Coast, the jihadist group
was targeting its sworn enemy France, analysts said Monday.

France also set up its first colonial administration centre at the same spot in 1893.

Even today, a bridge over the lagoon separates the district called “France” from the colonial-era villas and hotel of the same name. Another hotel there is called “Petit Paris”.

“Grand-Bassam is the historical capital of French colonisation, with a museum about missionaries and a French cemetery. It was the perfect target to send a message to France and Africa,” he said. “In fact, it is astonishing that it was not better protected.”

Glaser saw the attack as an attempt by AQIM, which the US-based SITE Intelligence Group said had claimed responsibility, to warn France that its actions in Africa were not without consequences.

“It allows AQIM to say to Paris: 'See, you are hunting down jihadists in Mali, in northern Niger and in the Sahel region of the Sahara, but we are striking at the heart of business and at the French presence in the region.'”

And the extremists did that by targeting Grand-Bassam, “a historic site where your expatriate executives go to the beach on Sundays,” he added.

The French army has long been based in Ivory Coast and 600 soldiers are currently spread around four bases in the commercial capital Abidjan.

The attack is the first of its kind on Ivory Coast but the Tunisian resort of Sousse, the Malian capital Bamako and Burkina Faso's capital Ouagadougou have all been targeted in the past year. All are places where French citizens
work or play.

Ivorian Interior Minister Hamed Bakayoko said Monday that the attack had been preceded by warnings.

“Security forces have already foiled quite a few attempted attacks in the past. Our country has been a target for a few years.”

AQIM's leader Yahya Abou El Hamame said in an interview in January with the Mauritanian site Al-Akbar that the group would “spare no effort” to strike countries in the region “which participate in this Crusader war against Umma
(the Islamic community)” and the Western interests based in those countries.

The attack on Ivory Coast was “entirely predictable”, according to Isselmou Ould Salihi, a Mauritanian expert on jihadist groups.

“We can conclude from it that AQIM's move to widen its attacks across the region is the logical widening of the ongoing war against jihadists in northern Mali,” he told AFP.

“So countries that take part in MINUSMA (the UN mission in Mali) will be directly or indirectly attacked, one by one.

“The next target could logically be Senegal… which has played an anti-AQIM role.”

He said: “AQIM is trying to weaken France's allies or those which take part in MINUSMA to push them to leave or to reduce their presence in Mali and to hit the economy of those countries which are generally reliant on the tourism sector.”

He believes the extremists are also aiming to carry out “lightning strikes” on places which Westerners frequent.

Robert Besseling of Exx Africa, a specialist intelligence company, also said the attacks should not have come as a surprise.

“Ivory Coast has been receiving warnings for at least a year from France's intelligence service that Islamist militants are planning to attack major cities,” he said.