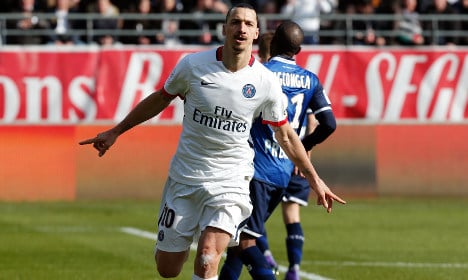 The Parisian giants, inspired by four stunning goals by the tall Swede, turned on the style on Sunday to beat Troyes 9-0 and clinch a fourth consecutive Lique 1 crown in record time.

Just four days after advancing to the Champions League quarter-finals, PSG wrapped up the club's sixth French title with eight games to spare, obliterating the French record for the quickest league victory.

Ibrahimovic took centre stage in the second half with four goals that added his total French Ligue 1 score to 102 goals, including 27 in 24 games this season, breaching the 100 barrier for the first time.

The 34-year-old became the club's all-time leading goal scorer in October last year if you include all games, not just the ones played in France's top football league.

It is not yet known where he will go after the summer, when his current deal with PSG runs out, with the striker being linked to clubs both in England and Italy. And in a post-match interview on Sunday he told sports channel Bein Sports that at the moment he looks likely to leave.

However, he hinted that he may yet be talked into staying: “I don't believe they can change the Eiffel Tower for my statue. (…) But if they can I'll stay, I promise you!”

PSG president Nasser Al-Khelaifi did not make any pledges, but insisted he was hopeful.

“Zlatan is magical. He is a great player. We are going to talk to him and see what he wants to do. We want him to stay.”

PSG will next target a maiden Champions League triumph, having already seen off Chelsea in the last 16.

“We must now stay focused because the season is not finished. (…) We want to go as far as possible, but we know there will be some very strong teams,” said Al-Khelaifi.